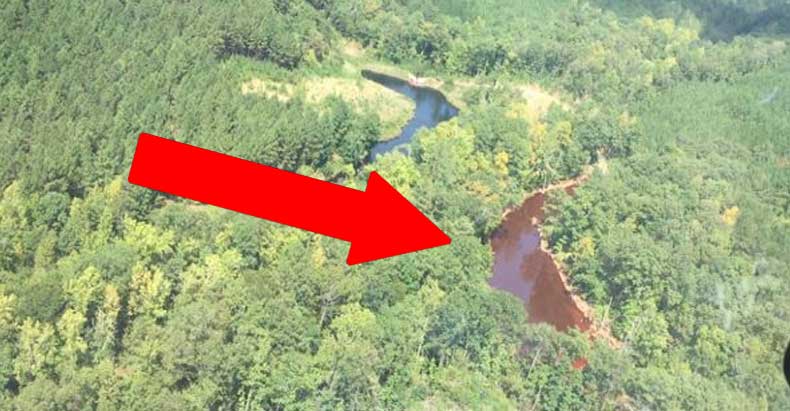 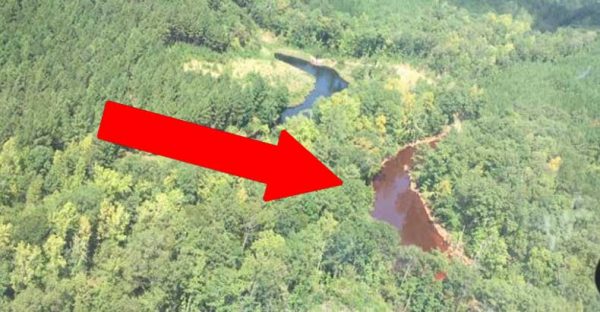 Since an Alabama mine worker first alerted Colonial Pipeline officials to a massive rupture, more than a quarter million gallons of refined gasoline have poured into a waterway, threatening the environment and health of residents in Shelby County.

Colonial insists the spill has been contained in a mining retention pond and booms have been deployed to prevent the hazardous fossil fuel from escaping into a now-dry creek bed that connects the pond to Peel Creek.

According to the company’s website and local reports, at least 252,000 gallons, the equivalent of 6,000 barrels — notably, only an estimation — escaped from the pipeline, which runs from Houston to the south and eastern seaboard, and terminates in New York Harbor.

“There has been no threat to public health or safety,” Colonial stated on its website, “and the safety of our responders remains the top concern.”

Colonial’s Incident Command, comprised of over 500 employees and private contractors, have responded to the massive leak and are monitoring the situation.

Alabama Governor Robert Bentley and Georgia Governor Nathan Deal have both issued executive orders declaring states of emergency — not for threats to the environment and residents, but because the massive spill is expected to cause fuel shortages throughout the Southeast.

“Based on current projections and consultations with industry partners, parts of Georgia, Alabama, Tennessee, North Carolina and South Carolina will be the first markets to be impacted by any potential disruption in supply,” Colonial stated.

As sterile a picture as Colonial and government officials presented the ginormous leak, the refined gasoline sullied the William R. Ireland Sr. Cahaba River Wildlife Management Area — forcing the Division of Wildlife and Freshwater Fisheries to close the space to the public until remediation can be completed.

Colonial spokesperson Bill Berry said the spill covered an area approximately two acres in size, but had only contaminated one of three retention ponds in the area.

Pictures of the ruddy brown, contaminated mine water retention pond circulated widely by Friday, further angering those concerned about construction of the Dakota Access Pipeline far to the north. In fact, Native Americans from over 200 nations and tribes who have gathered in camps near Cannonball, North Dakota, to protest construction term themselves ‘water protectors’ as the pipeline could threaten pristine waters of the Missouri River — the source of drinking water for over 18 million people.

Although the water protectors and supporters have recently garnered negative attention, the Colonial spill — and countless others — potently evidence their concerns.

“You sit down for dinner and you watch the news and you see another spill with tens of thousands of gallons of oil and reports that no one is hurt or the leak is stopped and you know, just from experience, that’s probably not true,” Colette Pichon Battle, executive director of the Gulf Coast Center for Law and Policy, told ThinkProgress in May following an 88,200-gallon oil leak by Shell into the Gulf of Mexico. “Who is really going to be hit? It’s going to be our Native American communities that live on, and depend on, the coast.”

On September 5, 5,300 gallons of oil spilled into Barataria Bay in southeastern Louisiana, and flowed to a barrier island — which, ironically, was in the process of restoration from the 2010 BP Deepwater Horizon oil spill.

In June, some 700 barrels of oil spilled from a pipeline in Hall Canyon, California, initially threatening nearby beaches and wildlife. First reports estimated the spill had been much larger, but officials assured the public of the smaller quantity.

In 2011 and 2015, massive quantities of oil poured from leaks in ExxonMobile’s pipelines into the Yellowstone River, though, each time, the company insisted it “deeply” regretted the error.

Alabama’s latest Big Oil and Gas disaster will be downplayed by officials and quickly forgotten by those fortunate enough not to live closeby — but the fossil fuel industry’s inept record with transporting oil and gas across the country will continue.

Instead of criticizing the methods and tactics of water protectors in North Dakota, perhaps we all should be asking why we continue to depend on an industry directly threatening our dwindling freshwater stores. Cynicism and chastisement of activists looks awfully foolish when the subject of their outrage is the very life-sustaining water we all depend on.