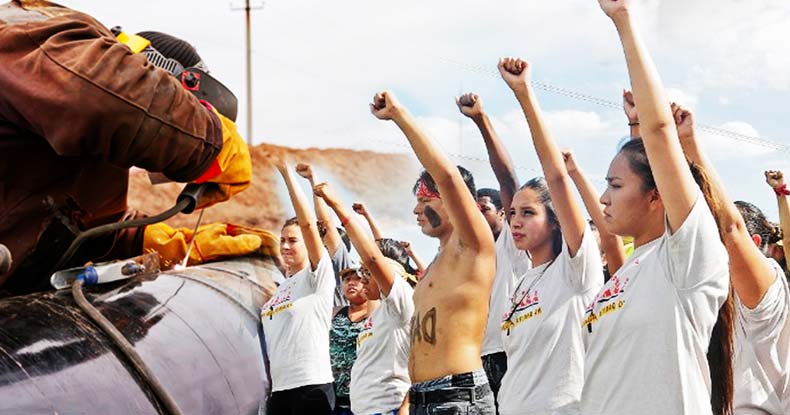 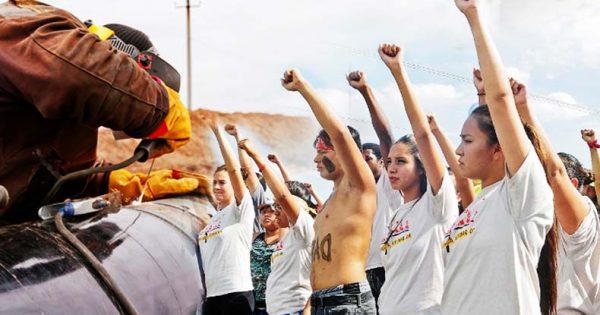 While the government scrambles to decide if indigenous peoples have a right to the land they’ve inhabited for eons, a three-judge panel of the U.S. Court of Appeals for the District of Columbia Circuit issued an order to temporarily halt construction on another section of the searingly controversial Dakota Access Pipeline.

Clarifying its ruling, the court stated the order “should not be construed in any way as a ruling on the merits of that motion” — the motion being the Standing Rock Sioux Tribe’s demand for an emergency injunction.

On September 9, federal Judge James E. Boasberg, presiding over the case between the Standing Rock Sioux and construction firm Energy Transfer Partners, ordered a construction stoppage on U.S. Army Corps of Engineers land under and around Lake Oahe — and Saturday’s ruling expands the halt to include land within 20 miles on either side of the lake.

The Standing Rock Sioux Tribe, supported officially in court by the Cheyenne River Sioux Tribe, requested the injunction after ETP construction crews decimated land surveyed by historians found to contain sacred and culturally-significant sites — an action seemingly retributive in nature since ETP had to drive bulldozers 20 miles from active construction sites to do so.

Supporters of the Standing Rock Sioux water protectors — including thousands of people from over 200 Native American nations and advocates and activists — have assembled and camped at the construction site for months in an effort to block Dakota Access Pipeline Construction. Despite the massive numbers, the peaceful resistance went largely ignored by mainstream media until a privately-contracted security firm sicced vicious dogs against the water protectors — including women and children — on September 3.

ETP has previously said the tribes and their supporters were acting illegally in their peaceful protest, but, on Friday, the Army Corps of Engineers issued its own ruling “granting the tribes a temporary permit that allows demonstrators to legally protest on federal lands managed by the agency. In turn, the tribe assumes responsibility for the maintenance, damage and restoration costs, the security and safety of protesters, and liability insurance,” the Chicago Tribune reported.

“It protects the protesters’ right to assemble and free speech, while at the same time protecting legal commerce to go forward,” said U.S. House Rep. Kevin Cramer, according to the Tribune. “It sets up parameters and certainly puts liability where liability belongs, with the protesters and the leaders of the protest movement.”

At the heart of the opposition is ETP’s planned 1,172-mile, $3.8 billion pipeline slated to “convey light sweet crude from the Bakken formation in northwestern North Dakota to Patoka, Illinois,” as Bloomberg described.

Although Energy Transfer Partners believes the project essential to domestic oil and gas infrastructure, various segments of the planned route have infuriated Native Americans and local residents — in particular, construction intended to go under the Missouri River just north of the Standing Rock Sioux’ reservation, the source of drinking water for over 18 million people.

As pipelines are notorious for leaks and spills — a state of emergency has just been declared in Alabama and Georgia after refined gasoline spewed thousands of gallons into an ecologically-sensitive area — concern for the safety of the drinking water supply stands at the core of opposition to construction.

To the Standing Rock Sioux, areas of cultural and historic significance could be irreparably compromised if the Dakota Access Pipeline is constructed as planned.

Thus, in July, the Standing Rock Sioux sued the Army Corps of Engineers — which must grant permission for easement to allow ETP construction to proceed — under the premise the project threatens its “environmental and economic well-being and would damage and destroy sites of great historic, religious and cultural significance to the tribe.”

Thousands of indigenous peoples from around the country and world have joined encampments to stand against yet more exploitation and opportunism by the U.S. government.

“When the Army Corps of Engineers dammed the Missouri River in 1958, it took our riverfront forests, our fruit orchards and most fertile farmland to create Lake Oahe. Now the Corps is taking our clean water and sacred places by approving this river crossing. Whether it’s gold from the Black Hills or hydropower from the Missouri or oil pipelines that threaten our ancestral inheritance, the tribes have always paid the price for America’s prosperity.”

Saturday’s ruling offers temporary reprieve, but is also seen as a possible positive portent in the fight to shut down pipeline construction — and wrest Big Oil of a bit of its stranglehold on power.