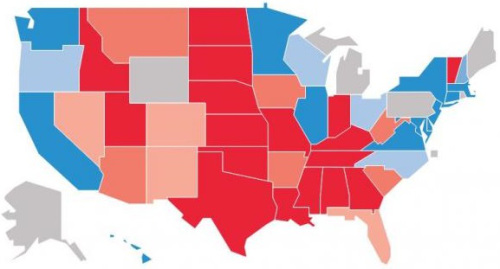 As reported by ZeroHedge, whereas on August 26, 2016 Reuters had predicted a landslide victory for Hillary:

The map below shows Reuters‘ latest prediction of what the 2016 Electoral College map will look like once all the votes are counted. Notice that the entire central portion of the U.S. has turned red (including Colorado and New Mexico) along with Florida and South Carolina in the Southeast. Reuters even moved Pennsylvania out of the Democrat column and into the “Too Close To Call” column.

Most importantly, in the 20 days between August 26 and Sept. 15, the battleground states are shifting to Trump:

To top it off, Hillary’s losing although she’s spending 3,300% more on campaign ads than Trump.

Below is a diagram from Ad Age (via ZeroHedge) of money spent on campaign ads by Trump and Hillary:

According to Advertising Age, between now and Election Day, the Clinton campaign and its allied super PACs have booked $145.3 million in ad time — more than 33 times the $4.4 million for Trump and his groups.