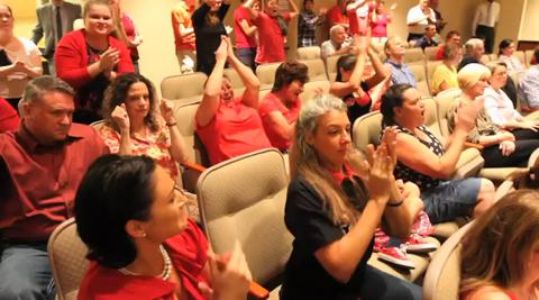 On August 24, the Lee County School Board voted to opt out of all standardized tests that were tied to Common Core or end-of-course exams. The response to the historic 3-2 vote was ecstatic, but it was short lived.

Take a look at the response of the people when the announcement was made.

The 3-2 vote left more questions than answers as the southwest Florida school district becomes the first in Florida to say no to Common Core testing. The meeting adjourned without any discussion regarding whether any testing will replace the state tests.

“Sometimes it takes an act of civil disobedience to move forward,” said school board member Don Armstrong. “We cannot allow the fear to hold us back.”

Board members Tom Scott and Mary Fischer voted with Armstrong, a decision that was met with cheers and applause from red-clad supporters who packed the house for the meeting. Fischer was initially reluctant to the idea, but served as the tie-breaker on Wednesday.

“No matter what else is going on, teachers go on and they teach the students,” she said. ‘If this is our window of opportunity, I hope we make the best of it.”

At the time Superintendent Nancy Graham told the board, “This will hurt children. There is no way around it.”

The crowd booed her and rightly so.

However, the vote barely stood a week before being rescinded. On September 2, Florida Today reported:

A Florida school board rescinded its vote Tuesday to opt out of standardized testing standardized, changing its mind about its unprecedented decision that captured the growing discontent among parents and teachers nationwide over the number of tests children are given.

In a first for Florida and possibly the nation, Lee County voted last week not to administer tests tied to the Common Core academic standards or any end-of-course exams. The vote came after parents organized petitions, Facebook groups and meetings in favor of scaling back or getting rid of standardized testing.

“People said, ‘Enough is enough,'” said Bob Schaeffer, education director for the National Center for Fair and Open Testing, which endorsed the opt-out vote. “The volume of standardized testing has exploded out of control.”

But the decision was met with immediate backlash: Superintendent Nancy Graham warned the opt-out could hurt students and asked the board to change its vote. The Florida School Boards Association cautioned that students who didn’t take the state’s standardized tests wouldn’t meet the requirements to earn a standard high school diploma, and also could miss the opportunity to earn college credit.

On Tuesday, the Lee County school board voted 3-2 in favor of resuming testing.

It’s time parents across the country realize that public schools are nothing more than statist indoctrination centers that are bent on leaving behind our Christian heritage and teaching kids that their ultimate aim is the glory of God and the advancement of His kingdom in whatever they set themselves to do in life.