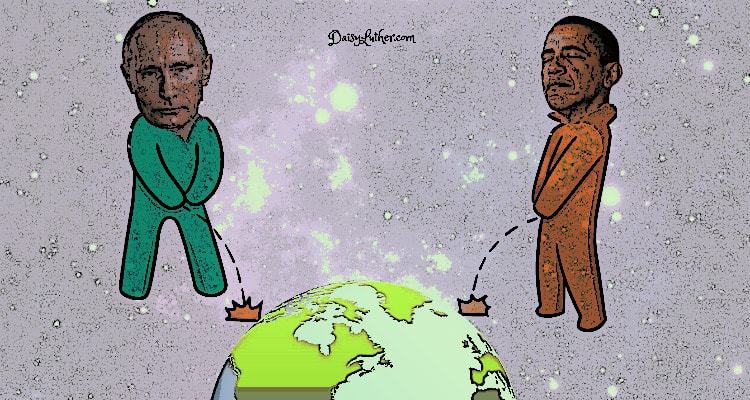 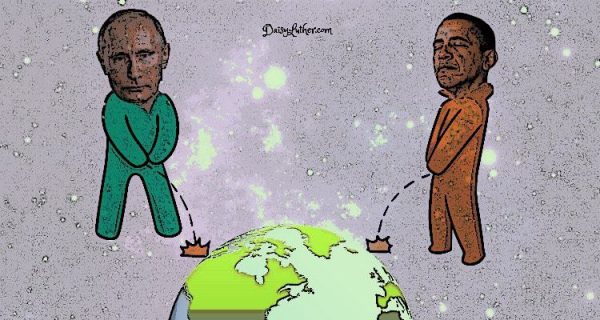 A peeing contest is  “a game in which participants compete to see who can urinate the highest, the farthest, or the most accurately.”

President Obama and President Putin have been engaging in just such a match for quite some time, but things are beginning to escalate in a very ugly way. The two leaders are blaming one another for two deadly air strikes in Syria, and tempers are rising.

Remember a couple of weeks ago when I wrote about President Obama poking the bear in Syria?

The bear, otherwise known as Russian President Vladimir Putin, is poking back.

According to the Russian Ministry of Defense, two F-16 fighter jets and two A10 ground attack aircraft that entered Syrian airspace from Iraq launched airstrikes against the SAA base in the city of Deir ez-Zor, leaving at least 62 Syrian servicemen killed and more than 100 wounded.

‘Deliberate airstrike’ First Deputy Chairman of the Defense and Security Committee in Russia’s Federation Council Franz Klintsevich maintained that what happened in Deir ez-Zor on Saturday was not an accident. “The US conducted airstrikes on government forces in Syria deliberately and thoughtfully. Any aerial operation is coordinated with commanders on the ground. In this case [the US] used information received from their intelligence units who infiltrated Daesh,” he told RIA Novosti.

The airstrike on the SAA in Deir ez-Zor, he added, reflected America’s double standards.

A medical clinic was totally destroyed Tuesday, killing doctors, nursing staff, and the patients who were being treated there. A serious and worrying uptick in rhetoric has seen Russia with the United States arguing over who was actually responsible and phrases like ‘war crimes’ are getting thrown around.

The United States government has stated publicly that they hold Russia responsible for the strikes. Russia fiercely denies their involvement in either strike.

The most recent strike, near Aleppo, came just a day after an attack that wiped out an aid convoy that was bringing much-needed food and medical supplies to the region. Russia vehemently denies involvement in either incident and says that the US was responsible for both occurrences.

The Middle East is a tinderbox right now and just one well-placed spark will set off a chain reaction of explosions that will reverberate around the globe. It’s becoming increasingly clear that the civil war afflicting Syria could easily go global when two superpowers back different sides in the conflict.

We, as a country, should not be interfering in the affairs of sovereign nations. Can you imagine the reaction of our government if another country said, “Hi, guys.  We don’t like the way you’re doing things, so we’re going to station a few hundred of our soldiers on your soil. Oh, and we may get our Air Force to fly over and drop a few bombs while we’re at it.”

Would such a force not be considered an invasion of our sovereign territory? Would we not try to shoot down the bombers before they arrived?

The United States and Russia are staring each other down in an international and deadly version of a Mexican stand-off. This is a very dangerous position to be in. One twitch on the trigger and we will all find ourselves in the midst of a global conflict – one in which the primary players have nuclear weapons. Who remembers a few years back when Vladimir Putin casually remarked that Russia could “destroy America in half an hour or less”? Keep in mind that Russia recently positioned military forces a mere 50 miles from the US border.

Europe, situated with Russia to the north-east and Syria to the southeast, is dealing with so many problems of their own they can barely keep their own country’s citizens in line let alone cope with getting involved in a global conflict.

The UK, an island in the sea, with Russia on one side and the US on the other, isn’t in the best geographical position should things escalate. A full-on war would see people practically swimming the English Channel to get away from mainland Europe.

The situation is growing more dire by the day and all of our fates are bound up with what happens in the Middle East. The region has been unstable for years and now it looks set to crack wide open with two countries, who have no business at all even being there, arguing over who killed whom , when and why. It feels like it’s getting more and more about the might of Obama and Putin rather than the people of Syria. It certainly seems that war is upon us, with the only question being who will take the first swing.

I’ve written at great length about Europe preparing for war. Maybe they know more than we do here about the conflict between the US and Russia.

The war of words rages on…but how long before words turn into something worse?