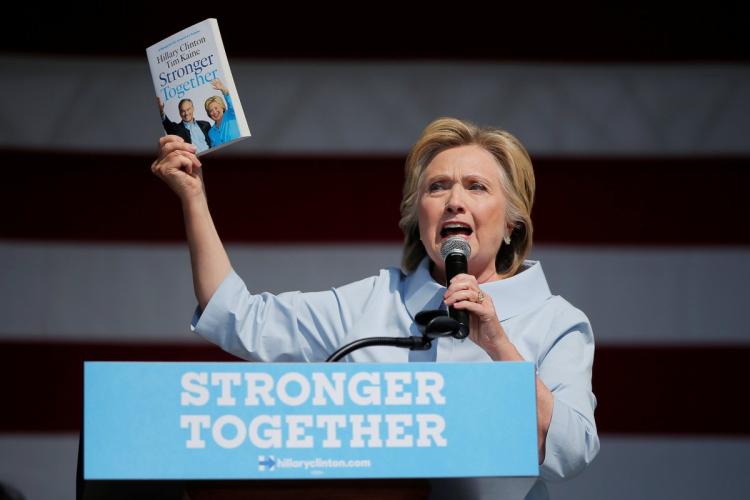 As her poll numbers tumble, with Reuters’ latest showing her 242 Electoral College votes are now in a virtual tie with Trump’s 243, there’s more bad news for Hillary. (See “Reuters polls show huge electoral shift to Trump despite Hillary outspending Trump on campaign ads by a whopping 3300%“)

ZeroHedge reports that Hillary’s newest piece of crap, Stronger Together, which provides a policy blueprint for where she hopes to take the country if she is elected president, sold just 2,912 copies in its first week on sale, according to Nielsen BookScan.

As described by the New York Times — the rag that openly advocates journalists abandon even a pretense at objectivity in reporting on Trump, and calls on Google to suppress searches for Hillary Clinton’s health — the book is named after Hillary’s campaign slogan. According to the book jacket, Stronger Together offers readers “specific and practical solutions, while also articulating a bold and expansive vision of change and renewal” in 250 pages of bullet-point policy ideas, like “launch a national initiative for suicide prevention” and “humanely address the Central American migrant crisis,” with photographs of Hillary and her co-demon Tim Kaine on the campaign trail, as well as highlights from her speeches.

All lies, from a clinically pathological liar and sociopath.

The NYT says that Hillary and Kaine have promoted her book on the campaign trail, but the sales figure, which tallies about 80% of booksellers nationwide and does not include e-books, firmly makes the book what the publishing industry would consider a flop.

The book’s page on Amazon.com — the same Amazon.com that first sold, then banned the book Nobody Died at Sandy Hook (which you can download and read here — for free!) — garnered an average 2-stars rating from 1,051 customer reviews.

Here’s a sample of the reviews. Enjoy!