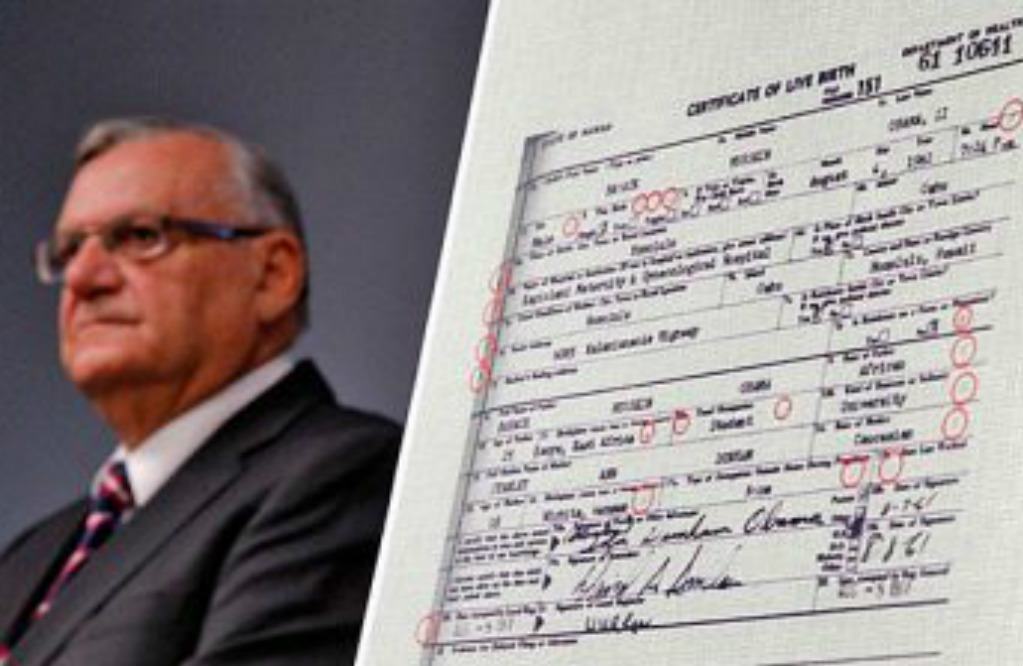 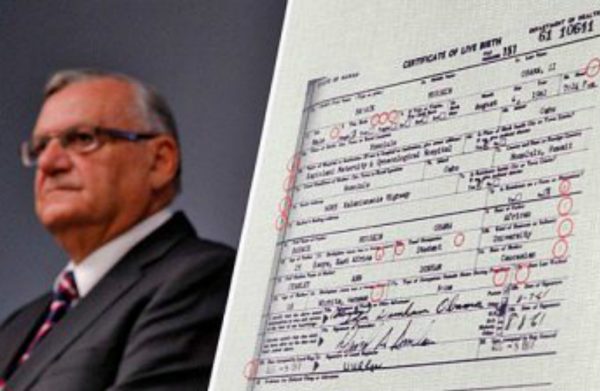 In recent days GOP presidential candidate Donald Trump swept under the rug the eligibility of Barack Hussein Obama Soetoro Soebarkah. Many followed him blindly, but not this outlet and not Maricopa County Sheriff Joe Arpaio. Arpaio continues to be unmoved that Obama’s online birth certificate is a forged document and claims that he will not abandon the facts nor the investigation.

Appearing at The Surprise Tea Party Patriots on Tuesday, Arpaio told the crowd, ““I don’t know how it’s going to turn out. I don’t care where he’s from, we are looking at a forged document. Period.”

Arpaio then distanced himself from Trump who claims the matter is closed because Obama produced the forged document, which is still housed on WhiteHouse.org.

“I had nothing to do with Trump on the birth certificate,” Arpaio said. “We did it on our own, because of you guys.”

“I know all the politicians say, ‘Sheriff, don’t talk about it,’ ”Arpaio said. “But how can I back down when we started it? I’m not going to just forget it.”

Arpaio was not the only one to speak to the group of patriots. His chief investigator Mike Zullo also made several comments.

Zullo claimed that Trumps comments were a “punch in the gut, because it was unexpected.”

Zullo also called Trump’s comments “strategic,” indicating that it was more about politics than actually seeking the truth. I tend to believe that. Why would he want to have to pursue what has been labeled a “conspiracy theory” when the facts tend to bear that out? I mean we are talking about a man that held the highest office in the land under forged documents, and we aren’t just talking about his birth certificate, but also his selective service documents and social security numbers.

when others could not, Mr. Trump believes that President Obama was born in the United States.”

However, neither Trump nor his campaign actually obtained anything. Obama posted a forged document on the White House website. Will someone ask Donald Trump to produce an authentic birth certificate for Barack Hussein Obama Soetoro Soebarkah? Wouldn’t he have to produce a paper document to claim that he “obtained” the birth certificate? I think so.

State Rep. Phil Lovas, a Peoria Republican and director of the Trump campaign in Arizona, said in a brief interview that the Trump statement speaks for itself.

“I believe it is, but I haven’t examined it,” Lovas said before addressing meeting attendees.

Jeff Lichter, who was among the Surprise Tea Party Patriots who signed the letter asking Arpaio for the investigation, demurred when asked about Trump’s statement.

But during a presentation to the Surprise Tea Party Patriots, Lichter said that, when he and two state lawmakers traveled to New York in April 2011 and met with Trump in Trump Tower, the businessman told them he anticipated Obama would be releasing a fake birth certificate.

“My sources in D.C. are telling me there is going to be a fake birth certificate,” Lichter quoted Trump as saying.

Barb Heller, 59, of Glendale, who attended the meeting, said that she doesn’t see a conflict between the birth certificate investigation and Trump’s statement.

“He said he was born in the United States,” Heller said before the meeting. “He didn’t say it was a true document.”

OK, can we get verification on the claim that Trump expected a fake birth certificate and why he would then claim that Obama is an American and eligible for the office of president? This is especially urgent to determine in light of Trump’s own questioning of Ted Cruz’s eligibility, and the fact that eligibility is a constitutional issue.

Trump’s claim that Obama is now an American comes just over a year after he claimed otherwise. Why does no one question him on this claim and demand evidence?