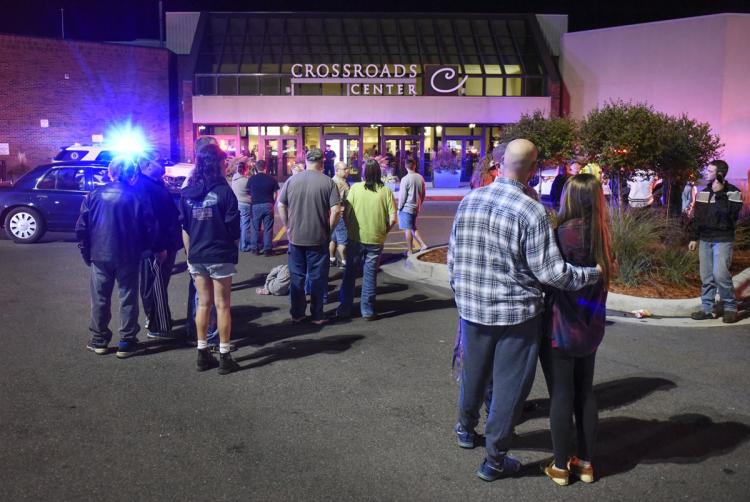 The wave of Muslim refugee terror began with a bomb targeting a U.S. Marine charity run in New Jersey. By evening a pressure cooker full of shrapnel has exploded outside a Manhattan building for the blind. An hour later, a rampaging Muslim terrorist began stabbing people inside a Macy’s, asking them if they were Muslim and shouting the name of “Allah,” the genocidal Islamic deity of mass murder. 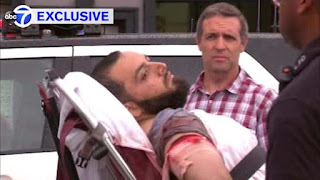 And that was one Saturday, two Muslim refugees and a wave of national terror 1,200 miles apart.

What did Elizabeth, New Jersey and St. Cloud, Minnesota have in common?

New Jersey has the second largest Muslim population in the country. This
isn’t the first time it was used as a staging ground for Muslim terror.

11 of the 19 September 11 hijackers hung out in Paterson (known colloquially as Paterstine). Head toward Jersey City and you can see where Muslim enemies of this country stood on rooftops and cheered the attacks on September 11. It’s also where the World Trade Center bombing mastermind and the Blind Sheikh, who provided religious guidance for a proposed wave of Islamic terror, operated.

Go south and in Elizabeth you can pass the First American Fried Chicken joint where the Rahami clan made life miserable for their American neighbors before one of their spawn began his bombing spree.

New Jersey is a map of Muslim terror plots because of its huge Muslim population.

Ahmad Khan Rahami came to America as the son of an Afghan refugee. He stabbed a man two years ago. His family was a local nuisance who cried “Islamophobia” at the least provocation. His brother was a Jihadi sympathizer and may have fled the country after assaulting a police officer. By the time Ahmad was done, he had wounded a police officer and 29 other people. If his plot had succeeded, he might have pulled off the largest Muslim terror atrocity in the country since September 11.

Sadly, Syrian Muslim “refugees” continued to be dumped in Elizabeth, NJ to seed the next wave of Muslim terror. The International Rescue Committee, one of the two largest migrant agencies plaguing the Garden State, is based in Elizabeth, 8 minutes away from the Rahimi chicken place.

Last year Erol Kekic, the head of the group, insisted that the issue would “blow over.” Instead of blowing over, it’s blowing up.

Minnesota has suffered from the presence of the largest Somali migrant population in the country. And so a state which used to be known for its Swedish and German immigrants instead became a recruiting ground for ISIS and Al-Shabab. Al-Shabab, which is aligned with Al Qaeda, attacked the Westgate mall in Kenya a few years ago. The Somali killers quizzed their victims to distinguish Muslims from non-Muslims.

Dahir Adan, the Somali Muslim migrant who invaded America from a refugee camp in Kenya, attempted to duplicate that attack, asking those he stabbed at the Crossroads Mall if they were Muslims.

Dozens of Somali migrants in America have joined Al-Shabab and ISIS. The only difference between Dahir Adan and them is that instead of getting on a plane back to his native Somalia to join the local Jihadists, he carried out his Jihad against the nighttime shoppers in a Macy’s.

The Crossroads attack was the tragic price paid by innocent people for Muslim refugee resettlement.

Muslim Somali migration dramatically increased under Obama, rising from 2,500 in 2008 to around 8,000 and 9,000 in the last few years. Somali settlers represent almost 1 percent of the population of Minnesota. Most of the “refugees” dumped in St. Cloud were Somalis migrants and Lutheran Social Services has taken the lead in inflicting Somalis on the unfortunate natives of St. Cloud.

From the very beginning of their arrival, the Somali colonists were a problem for the people of St. Cloud. They displaced American workers and clashed with the native population. In this decade, St. Cloud has become 10% Somali. The Crossroads attack was the inevitable result of that demographic growth.

What happened in New Jersey and Minnesota is the same thing that has been happening in Europe. Islamic terrorism is caused by Muslim migration. As the Muslim population grows, so does its terror.

Minnesota Governor Mark Dayton had declared that the Somali occupation of the state is here to stay. “Minnesota is not like it was 30, 50 years ago,” he sneered. “Anybody who cannot accept your right to be here should find another state.”

Now Dayton has condemned the “religious bigotry” that motivated the Crossroads attack and declared that, “There is no place in Minnesota for intolerance of all Americans’ constitutional right to worship according to their beliefs.”

But the preferred mode of worship of Dahir Adan came from the religious book that he listed as his favorite, the Koran. “Slay the idolaters wherever you find them,” (Koran 9:5), “Strike upon the necks and strike from them every fingertip,” (Koran 8:12) and “Fight them until there is no unbelief and the religion, all of it, is for Allah” (Koran 8:39). Islamic worship is murdering those who exercise religious freedom. That’s what Dahir Adan was doing at the mall when he asked his victims if they were Muslims.

You can have religious freedom or Islam. You can have the Constitution or the Koran. But you can’t have both.

“I ask everyone in the St. Cloud area and throughout Minnesota to rise above this atrocity and act to make religious and racial tolerance one of the ways in which Minnesotans again lead our country,” Governor Dayton has said. If he and other Minnesotans really want religious tolerance, then the only possible way to achieve it is by ending the disastrous settlement of Somali Muslims in Minnesota.

The anniversary of September 11 has come and gone. And we have learned nothing from the experience. The cesspools of Muslim terror in New Jersey have only grown. And no amount of moments of silence will clean them up. The latest terror plot in New York City originates from the same swamp.

Refugee resettlement is becoming our biggest terror threat. Obama wants to hike next year’s refugee admissions to 110,000. That’s a 57% increase since 2015. The summer’s statistics showed that more Muslims were being admitted as refugees than Christians.

This weekend’s wave of terror is the result of our refugee policy. And that policy is getting worse.

Ahmad Khan Rahami and Dahir Adan were the products of our refugee policy of yesteryear. Today’s refugee policy will have far deadlier consequences and produce far more terror attacks.

Only ending Muslim migration can stop that.