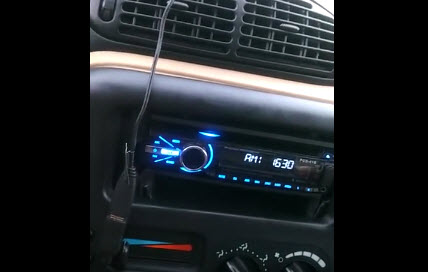 Here’s a bizarre, creepy conspiracy theory mystery for you…

Jet Wintzer uploaded the video below to YouTube September 20th. Apparently this robotic transmission about Donald Trump came out of an AM station in New Jersey. He wrote:

So this weirdness just happened on our way to Hoboken at 7AM this morning on the New Jersey Turnpike. On 1630 AM radio, a voice keeps repeating “Trump will go 26th”. It went on for at least 5 minutes from when the radio tuned it in while scanning. Near the Newark airport I78 part of Turnpike. Just landed in a Jason Bourne movie.

Things like this don’t just happen at random. It’s being reported though not confirmed as of yet that the station 1630 AM was hacked in order to broadcast this message.

The questions remain: what does it mean? Who broadcasted it? And why?

Some people are saying it’s a coded message about what’s to come; on the darker side of conspiracy theories, others are saying it’s proof an assassination plot is underfoot for the first debate and that this broadcast is a mind control trigger.

Why is that the case?

Think about what the transmission says, “Trump … will go… 26th.” Over and over and over for at least five straight minutes. Wintzer claims he was picking up the broadcast near the Newark Airport in New Jersey. The first debate, scheduled on the 26th, is set to be held at Hofstra University in Hempstead, NY, just 50 miles away. The theory goes that the trigger is being broadcast in spurts to the surrounding area for people already in place implanted with the hypnotic suggestion…

Note that, for what it’s worth, the debate was originally scheduled to take place at Wright State University (five miles from Wright-Patterson Air Force Base) in Ohio but was moved to Hofstra earlier this month. The official claim is that this was done for budget issues, but locally it was reported that the debates were actually moved due to security issues.

Wish I could just summarily dismiss this entire notion as crazy talk, just immediately say we don’t live in a world as insane and ridiculous as all that, and tell you that anyone who would suggest such a plot is obviously a tin foil hat nutter… but at the same time, it kind of sounds like the plot of The Manchurian Candidate, updated for the 21st century, not to mention but I will that the CIA has a sordid, decades-long history of mind control research specifically including the creation of Manchurian candidates.

What is that transmission really being broadcast for?

Sure, it could also be nothing at all, but considering this election is already the strangest one in American history (and it just keeps getting weirder by the day) you just never know.