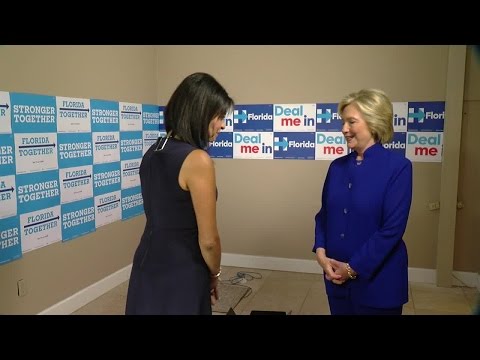 Several physicians have spoken out and offered their professional assessment of Hillary’s health. Some say she has Parkinson’s disease — a neurological disease that is progressive, i.e., it’s incurable and only gets worse.

None other than Obama’s former physician, Dr. David Scheiner, has said that Hillary should have neurological testing. Referring to Hillary’s well-known concussion in December 2012, after which a brain scan showed she had a blood clot, for which she continues to be treated with Coumadin, a blood-thinner or anticoagulant, Dr. Scheiner said:

At the 3:02 mark in the video below, the reporter brought up Hillary collapsing at the 9/11 memorial ceremony:

“Last week, you were remembering 9/11. I want to talk about your health for a moment. It was startling for many Americans to see you get into that van. I certainly hope you’re feeling better. I wanted to ask you that I know you provided documents from your doctors saying that you are fit to be the president of the United States. Some doctors have said because of your age, as well as your opponent’s age, that you could be at higher risk for dementia or even Alzheimer’s and have suggested that you take some neuro-cognitive test.”

At which, Hillary cackled, like a Hollywood central-casting witch (3:33 mark).

After her mocking cackling subsided, Hillary in effect refused to take a neurological test when she said:

“I am very sorry I got pneumonia; I am very glad that antibiotics took care of it and that’s behind us now. I have met the standard that everybody running for president has met in terms of releasing information about my health.”

Beginning at the 6:44 mark, the reporter asked Hillary about the “scandals” in her past, especially her using an unsecured email server to conduct her work as secretary of state.

“If people are concerned about information, I’ve had some of the most secret information that anybody in government could have. I was involved in the small group advising President Obama about whether or not to go after [Osama] bin Laden. I am very committed to and careful with classified information, and I think that anybody who looks at my whole record knows that.”

What a load of horse manure.

To begin, Hillary had said she didn’t know that ‘C’ stood for ‘classified’ in emails, assuming that we actually believe her ludicrous claim.

The fact is the email that then-Secretary of State Hillary Clinton accessed using her unsecured email server contained not just classified information but some of America’s top top secrets, as well as the names of CIA spies, which means she had put their lives in jeopardy. See:

The fact is she was so careless with classified information that she didn’t even bother to have a password on her email account.

The facile way in which this woman lies is pathological and downright scary.