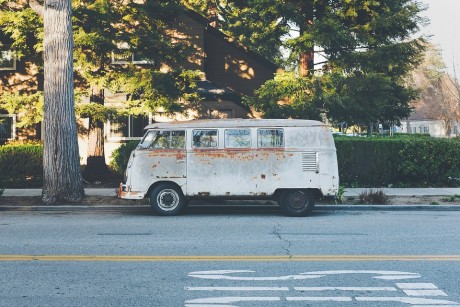 Do you remember the old Saturday Night Live sketches in which comedian Chris Farley portrayed a motivational speaker that lived in a van down by the river?  Unfortunately, this is becoming a reality for way too many Americans.  As the middle class has shrunk and the cost of living has increased, a lot of people have decided to quite literally “live on the road”.  Whether it is a car, a truck, a van, a bus or an RV, an increasing number of Americans are using their vehicles as their homes.  Just recently, someone that I know took a trip down the west coast of the United States and stayed at a number of campgrounds along the way.  What she discovered was that a lot of people were actually living at these campgrounds.  Of course there are some that actually prefer that lifestyle, but many others are doing it out of necessity.

Earlier this week, Circa.com posted a story about “the van life”.  One of the individuals that they featured was a recent graduate of the University of Southern California named Stephen Hutchins.  Without much of an income at the moment, he decided that the best way to cut expenses was to live in his van…

“The main expenses are insurance for the van, which is like $60 a month,” said Hutchins. “Then, I have a storage unit for like $60.”

Living in a van is certainly not the most comfortable way to go, and many of you are probably wondering how he performs basic tasks such as cooking and bathing.  Well, it turns out that he makes extensive use of public facilities…

He showers at the gym, cooks on a portable stove on a sidewalk (he stores his butane at his friends’ place nearby) and uses wifi at nearby coffeeshops.

For a while such a lifestyle may seem like “an adventure”, but after a while it will start to get really old.  And not a lot of women are going to be excited about dating a man that lives in a van, and you certainly wouldn’t want to raise a family in a vehicle.

Sadly, just like during the last economic crisis many Americans are getting to the point where staying in their homes may not be an option.  Just check out the following excerpt from a recent New York Post article entitled “The terrifying signs of a looming housing crisis“…

The number of New Yorkers applying for emergency grants to stay in their homes is skyrocketing — as the number of people staying in homeless shelters reached an all-time high last weekend, records show.

There were 82,306 applications for one-time emergency grants to prevent evictions in fiscal 2016, up 26 percent from 65,138 requests the previous year, according to the Mayor’s Management Report.

I put a couple of phrases in that quote in bold because I really wanted you to notice a couple of things.

First of all, it is very alarming to hear that the number of New Yorkers staying in homeless shelters “reached an all-time high” last weekend.  I thought that we were supposed to be in an “economic recovery”, but apparently things in New York are rapidly getting worse.

Secondly, the fact that applications for emergency grants are up 26 percent compared to last year is another indication of how rough things are right now for average families in New York.  We all remember what happened when millions of families lost their homes to foreclosure across the nation during the last financial crisis, and nobody should want to see a repeat of that any time soon.

During this election season, Barack Obama and Hillary Clinton would like all of us to believe that the economy is doing just fine, but that is not true at all.  Even using the doctored numbers that the government gives us, Barack Obama is solidly on track to be the only president in all of U.S. history to never have a single year of 3 percent GDP growth, and he has had two terms to try to do that.

Gallup CEO Jim Clifton is also quite skeptical of this “economic recovery”, and he recently authored an article on this subject that is receiving a tremendous amount of attention.  The following is how that article begins…

I’ve been reading a lot about a “recovering” economy. It was even trumpeted on Page 1 of The New York Times and Financial Timeslast week.

The percentage of Americans who say they are in the middle or upper-middle class has fallen 10 percentage points, from a 61% average between 2000 and 2008 to 51% today.

Other surveys have found that it is even worse than that.

For example, a Pew Research Center study from the end of last year discovered that the middle class in America has now actually become a minority in this country.

Here are some other numbers that Clifton included in his article…

Once upon a time, America was the land of opportunity.

We were the place where anything was possible and where entrepreneurship was greatly encouraged.

But today we strangle small businesses to death with rules, regulations, red tape and taxes.

If the middle class continues to shrink, poverty will continue to rise.  Previously I have written about how the number of homeless children in the United States has shot up by 60 percent since the last economic crisis, and Poverty USA claims that a staggering 1.6 million children slept either in a homeless shelter or in some other form of emergency housing during 2015.

If you will be sleeping in a warm bed in a comfortable home tonight, you should be thankful.  An increasing number of Americans are sleeping in tent cities, in their vehicles or on the streets.  These hurting people deserve our love, our compassion and our prayers.