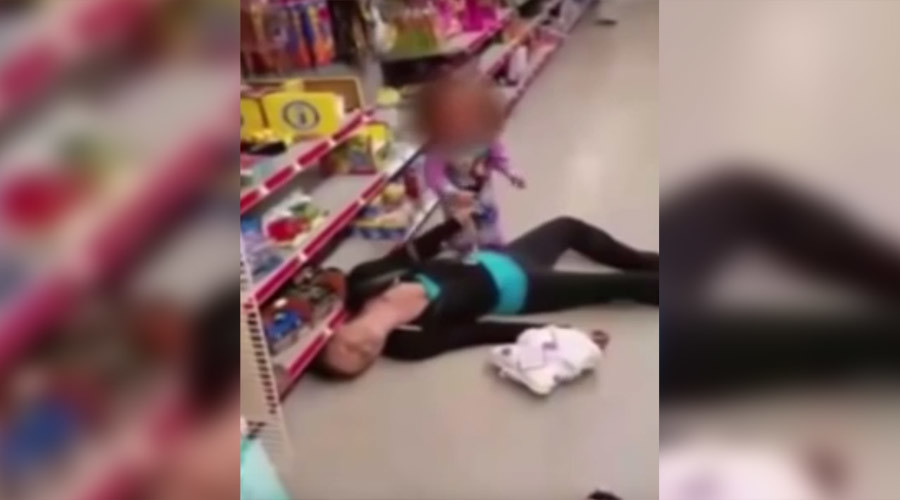 Child desperately tries to revive mother after she ODs on heroin

Shock video out of Massachusetts shows a 2-year-old toddler trying to wake up her mom who has just collapsed from a drug overdose as bystanders refuse to comfort the crying girl.

The incident, which occurred at the Dollar Store in Lawrence on Sunday morning, shows the mother prostrate on the floor of the toy aisle after a heroin overdose with her daughter sobbing beside her as the toddler pulls at her mother’s arm in an attempt to revive her.

However, an equally shocking aspect to the video is the fact that the obviously traumatized child is left completely on her own.

The man filming the clip and another woman heard off camera speak to each other in Spanish but refuse at any point to comfort the screaming toddler who is left alone with her unconscious mother.

Another man arrives on the scene and immediately begins to render aid to the collapsed woman and comfort the toddler.

“Oh my God, I know her” he states, before telling the child, “Mommy be OK,” and instructing the man filming the video to watch the toddler.

Paramedics then arrive and the clip ends.

“First responders used two doses of Narcan to revive the woman, who also allegedly had straws and baggies with drug residue in her purse,” reports WNEP.

The woman in the clip is set to be charged with child endangerment and the toddler has been placed in protective custody.

Earlier this month, shocking photos made public by Ohio police showed a four-year-old boy in the back seat of a car while his grandmother and her boyfriend were slumped in the front seat having overdosed on heroin.

America “is experiencing a devastating heroin and opioid epidemic as a result of the huge increase in prescriptions of opioid painkillers such as hydrocodone and oxycodone in the past decade,” reported the Telegraph.