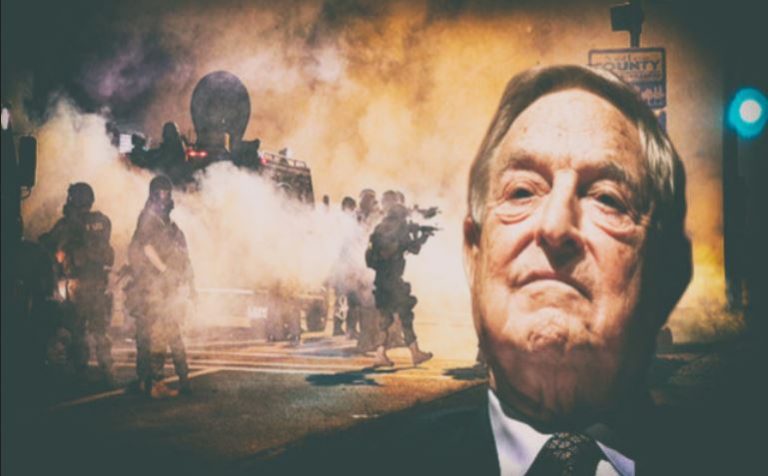 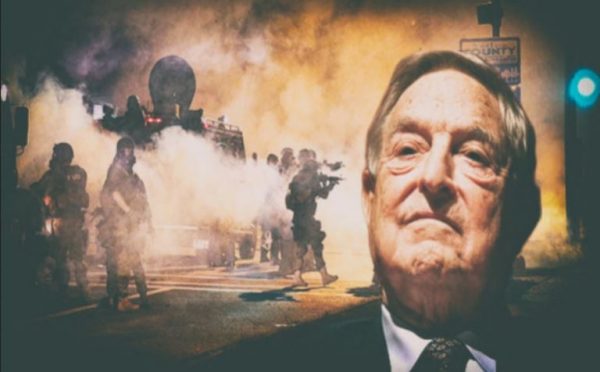 Todd Walther, spokesman for the Charlotte-Mecklenburg Fraternal Order of Police told CNN’s Erin Burnett that most of those arrested during the riots in Charlotte had out of state IDs and were bused into the city.

“This is not Charlotte that’s out here,” Burnett said. “These are outside entities that are coming in and causing these problems. These are not protesters, these are criminals.”

“We’ve got the instigators that are coming in from the outside. They were coming in on buses from out of state. If you go back and look at some of the arrests that were made last night. I can about say probably 70% of those had out-of-state IDs. They’re not coming from Charlotte,” he continued.

This draws parallels with the Ferguson riots in late 2014 which were bankrolled by billionaire George Soros.

As shocking as this statement is, it should not be a total surprise. 18 months ago, as the riots flared in Ferguson, there was one man pulling the strings of this ‘domestic false flag’… George Soros. In an apparent effort to “keep the media’s attention on the city and to widen the scope of the incident to focus on interrelated causes — not just the overpolicing and racial discrimination narratives that were highlighted by the news media in August,” liberal billionaire George Soros donated $33million to social justice organizations which helped turn events in Ferguson from a local protest into a national flashpoint.

There’s a solitary man at the financial center of the Ferguson protest movement. No, it’s not victim Michael Brown or Officer Darren Wilson. It’s not even the Rev. Al Sharpton, despite his ubiquitous campaign on TV and the streets.

Rather, it’s liberal billionaire George Soros, who has built a business empire that dominates across the ocean in Europe while forging a political machine powered by nonprofit foundations that impacts American politics and policy, not unlike what he did with MoveOn.org.

Mr. Soros spurred the Ferguson protest movement through years of funding and mobilizing groups across the U.S., according to interviews with key players and financial records reviewed by The Washington Times.

Organizers from professional groups in Washington, D.C. and New York were bused into Ferguson to coordinate messaging and lobby to news media to cover events using the billionaire’s funding, the WaPo reported.

The Soros money kept protesters on the street and in the media.

The cash was reportedly funneled into keeping up numbers of protesters in the community over a period of months by bringing in outside activists.

Meanwhile papers from think tanks were disseminated to bring in extra coverage of the civil unrest, also linked to the police killings of Eric Garner in Staten Island and Tamir Rice, 12, in Cleveland, Ohio.

Bringing in outsiders to cause destabilization is a hallmark of a Soros operation.

During the Wednesday night unrest in Charlotte, protesters were shouting “black lives matter” and “hands up; don’t shoot,” exactly what was being said in Ferguson, Missouri during the unrest there in 2014 after officer Darren Wilson shot and killed Michael Brown.

The significance of this is that George Soros has directly bankrolled Black Lives Matter.

This was revealed to be true when DCLeaks.com published Open Society Foundation (OSF) documents showing that the Soros group had given at least $650,000 directly to BLM.

Those same documents reveal the reason for OSF bankrolling BLM: the “dismantling” of America so that it can be recast according to the vision of Soros and his leftist cohorts, reported Mitchell Shall of The New American.

Is this an attempt by Soros to further divide the American people on racial lines and create an environment of mistrust between law enforcement and the public?

Or is the unrest in Charlotte a Soros plot to help his backed candidate in the presidential race, Hillary Clinton, by drawing the upcoming debate focus on domestic division as opposed to all the scandals she has been caught up in?

Soros has dumped $7 million into a super PAC supporting Clinton.

You can read more from Joseph Jankowski at his site PlanetFreeWill.com, where this article first appeared.