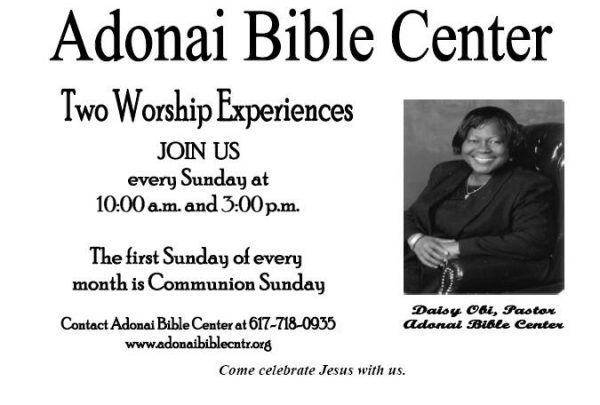 I do not believe that Pastor Daisy Obi, a 73-year-old ordained minister from Nigeria, threw the Islamic supremacist Gihan Suliman down the stairs. I think Suliman is a liar — I have seen this too any times. Muslim revenge. Muslims in Muslim countries under the sharia do this all the time: accuse Christians of blasphemy in order to get them jailed or punished.

The woman accused of saying anti-Muslim things and “pushing a Muslim tenant down the stairs” rents to several Muslims. So clearly she is not anti-Muslim. And secondly, the alleged victim had upwards of 15 people living her the apartment, so of course the landlord would complain.

This ruling is unconscionable. I think Obi should take a course in Islam from Robert Spencer or Ibn Warraq.

“After assaulting Muslim tenant, landlord must learn about Islam,” by John R. Ellement, Boston Globe, September 21, 2016 (thanks to Samantha):

A Somerville landlord and Christian minister convicted of pushing her Muslim tenant down the stairs must comply with a judge’s order that she learn about the Islamic faith as part of her probation, the state’s highest court concluded Wednesday.

In a unanimous ruling, the Supreme Judicial Court left intact the probation imposed on Daisy Obi by Somerville District Court Judge Paul M. Yee Jr. in 2014. The SJC’s ruling was based on procedural grounds and didn’t directly address the probation condition.

Writing for the court, Justice Barbara Lenk noted that under court rules, a person must first object in a lower court if he or she wants the high court to review it. No such objection was made by Obi and her attorneys, Lenk wrote.

“While conditions of probation that touch on religion and risk incursion upon constitutionally protected interests should be imposed only with great circumspection, the defendant raised no such concerns before the trial court judge, and there is no information in the record that would allow us to evaluate her claims,’’ Lenk wrote.

“Because she raises these claims for the first time on appeal, they have been waived.”

The SJC did approve the six-month jail sentence and other probationary conditions Yee imposed after Obi, who is in her 70s and a long-time landlord, was convicted of assault and battery on Gilhan Suliman, who was a third-floor tenant for a short time in 2012.

Obi’s appellate attorney, Kimberly M. Peterson, was reviewing the ruling and had no immediate comment.

In the Somerville courthouse, Yee ordered that Obi attend “an introductory class on Islam, and to provide her probation officer with written documentation that she had done so’’ and provide all future tenants with a written notice that she had been convicted of criminally assaulting one of her tenants.

He also ordered Obi to serve six months in the Middlesex County House of Correction.