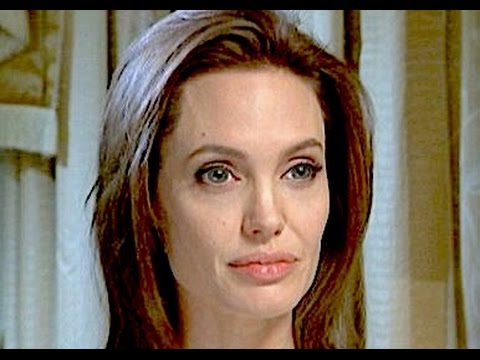 A video containing secret footage of a 23-year-old Angelina Jolie talking to two friends, in which Jolie admits to and describes the satanic ritual she undertook to enter the Order of the Illuminati, including twisting of nipples and the sacrifice of a snake.

Although Jolie cites “irreconcilable differences” on her divorce application, she or her proxies let it be known that she’s seeking sole physical custody of their 6 kids on the grounds that Pitt is unfit — doped on marijuana and alcohol. A specific recent incident is cited as what precipitated Jolie to seek a divorce, when the family were flying back to Los Angeles in their private plane. Pitt allegedly was drunk and became physically abusive of one of their children — believed to be their oldest, Maddox, whom Jolie had adopted from Cambodia before her affair with Pitt.

“A source close to Pitt” told the New York Post‘s Page Six that although Pitt had yelled at Maddox, “he never raised a hand to the boy”.

All of which makes the timing of the sudden discovery of this old footage of Jolie admitting to joining the Illuminati very interesting — suggestive of an effort by Pitt to retaliate against Jolie.

Or maybe not, since Pitt himself made the Illuminati 666 hand-sign when he posed to have his pics taken for a recent interview with the New York Times. (See “Brad Pitt gets deep on Trump and Brexit; makes 666 hand sign“)

In 2011, while promoting his new movie Moneyball at a press conference at the Toronto International Film Festival, Pitt was asked to reflect on his struggles as an actor in B-movies before he became a big star.

As reported by Fred Topel for StarPulse, Sept. 19, 2011, Pitt “joked” about making a pact with Satan. Pitt said:

“I grew up in a very Christian environment, a healthy environment, a loving family. But there were just parameters and things I didn’t understand. I always questioned it and it took me to my adult years or leaving home where I could really try on something different for myself. That was Satanism. It’s working out really well. I made a pact. That’s why the movie came out so well.”