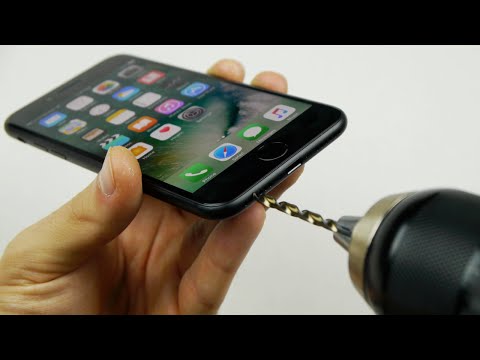 Apple’s latest iteration of the iPhone 7 includes a controversial hardware update that has left the phone without a standard 3.5mm headphone jack. The AUX jack that we’re all familiar with has been a hardware staple in music products for nearly half a century, but Apple decided that it was time to phase it out completely. Instead of the standard jack, you will now have to use Apple’s proprietary lightning port technology to hear your music.

This, of course, left many users upset. So much so that they sought out a possible solution online.

This led to Youtube channel TechRax, which is well known for regularly destroying mobile devices for testing purposes, to post a video entitled Secret Hack To Get Headphone Jack on the iPhone 7 which purported to provide a solution to the iPhone 7 dilemma.

Why not just drill your own 3.5 mm audio jack?

As of this writing over 9 million people have viewed the video and some of them, much to their later dismay, decided to drill their own jack.

As it turns out, the video was a total hoax. There is no way to drill a jack into the phone and doing so will render it unusable. And of course, social media exploded in outrage:

James Ceja wrote: ‘I tried this and ended up with display destruction and it not working… I really committed the biggest mistake of my life by watching the his video.’

David Iriarte posted: ‘ A friend of mine told me it worked for him, but my iPhone won’t turn on after I drilled the hole for the jack. I checked and it was the 3.5mm drill, so I made no mistake there! What happened? Any of you have the same problem?’

Toekneechair said: ‘Ok I am sure it’s in the comments somewhere but my friend told me to ask what size drill bit am I supposed to use? Also I don’t have that clamp thingy, can I or my friend hold it while we drill. I don’t want to ruin my phone. Thanks for all the help guys…’

Sean Solomon posted underneath the video: ‘I don’t know what I was thinking. I actually drilled about half way and realised that this is retarded and you were f****** we me. Now what to I do?’ 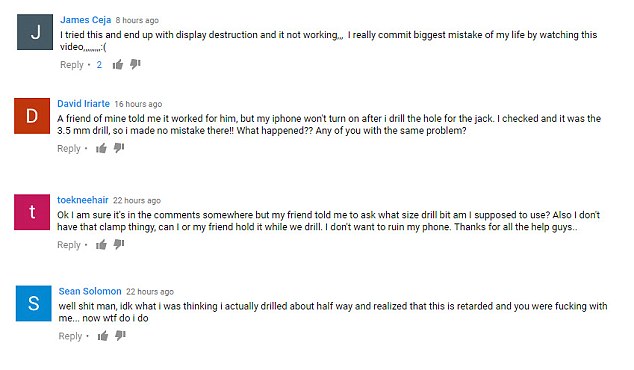 The fact that so many people fell for the hoax and destroyed an $800 iPhone led to one user commenting on the state of affairs for the human race as  a whole:

The amount of people that thought this is real is worrying for the future of the human race.