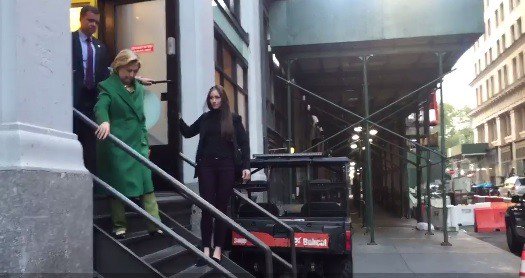 Video footage shot yesterday in New York shows a sick-looking Hillary Clinton wearing a heavy winter coat in New York despite it being a warm afternoon, with temperatures hovering around 70 degrees Fahrenheit.

Hillary is wearing a heavy green winter coat that is buttoned up, which would obviously be uncomfortable for healthy people on a warm day.

Just two weeks previously, Hillary infamously collapsed during another visit to New York, an incident that was blamed on her pneumonia and Clinton feeling “overheated”.

If she’s having problems feeling too hot, why is Hillary wearing a huge winter coat on a warm day?

Hillary also initially failed to hear the reporter in the clip at all, despite her being clearly audible and standing a mere ten feet or so away from Clinton.

When she does clock the reporter, Hillary’s demeanor totally changes from a gaunt-looking downbeat expression to a beaming smile.

Hillary is also keen to hold onto the hand rail as she carefully descends the small number of steps.

According to the Conservative Treehouse, the way Hillary walks, “indicates yet another example of how her lower visual acuity field is tenuous.”

It will be interesting to see what Hillary wears during her 90 minute debate with Donald Trump tonight under the full glare of hot studio lighting.