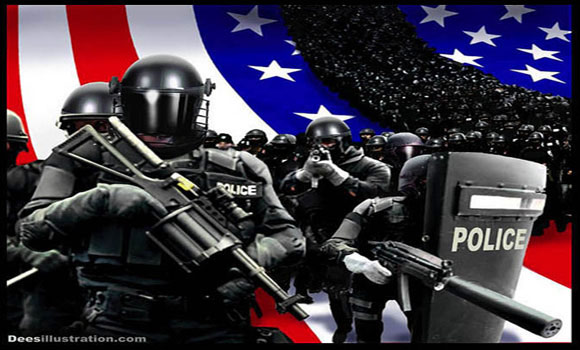 “If liberty means anything at all, it means the right to tell people what they do not want to hear.”—George Orwell

The final countdown has begun to the 2016 presidential election, and you can expect to be treated to an earful of carefully crafted sound bites and political spin.

Despite the dire state of our nation, however, you can rest assured that none of the problems that continue to undermine our freedoms will be addressed in any credible, helpful way by any of the so-called viable presidential candidates. Certainly not if doing so might jeopardize their standing with the unions, corporations or the moneyed elite bankrolling their campaigns.

In the interest of liberty and truth, here are a few uncomfortable truths about life in the American police state that we will not be hearing from either of the two leading presidential candidates.

1. The government is not our friend. Nor does it work for “we the people.”

2. Our so-called government representatives do not actually represent us, the citizenry. We are now ruled by an oligarchic elite of governmental and corporate interests whose main interest is in perpetuating power and control.

3. Republicans and Democrats like to act as if there’s a huge difference between them and their policies. However, they are not sworn enemies so much as they are partners in crime, united in a common goal, which is to maintain the status quo.

4. Presidential elections are not exercises in self-government. They are merely business forums for selecting the next CEO of the United States of America, Inc.

5. No matter which candidate wins this election, the police state will continue to grow. In other words, it will win and “we the people” will lose.

6. The lesser of two evils is still evil.

8. Americans only think they’re choosing the next president. In truth, however, they’re engaging in the illusion of participation culminating in the reassurance ritual of voting. It’s just another manufactured illusion conjured up in order to keep the populace compliant and convinced that their vote counts and that they still have some influence over the political process.

9. More than terrorism, more than domestic extremism, more than gun violence and organized crime, the U.S. government has become a greater menace to the life, liberty and property of its citizens than any of the so-called dangers from which the government claims to protect us.

10. The government knows exactly which buttons to push in order to manipulate the populace and gain the public’s cooperation and compliance.

11. Fear, which now permeates the populace, leads to fascism.

12. If voting made any difference, they wouldn’t let us do it.

13. America’s shadow government—which is comprised of unelected government bureaucrats, corporations, contractors, paper-pushers, and button-pushers who are actually calling the shots behind the scenes right now and operates beyond the reach of the Constitution with no real accountability to the citizenry—is the real reason why “we the people” have no control over our government.

14. The government does whatever it wants.

15. You no longer have to be poor, black or guilty to be treated like a criminal in America. All that is required is that you belong to the suspect class—that is, the citizenry—of the American police state. As ade facto member of this so-called criminal class, every U.S. citizen is now guilty until proven innocent.

16. Any police officer who shoots to kill rather than incapacitate is no longer a guardian of the people. By appointing himself judge, jury and executioner over a fellow citizen, such a police officer short-circuits a legal system that was long ago established to protect against such abuses by government agents.

17. Whether instigated by the government or the citizenry, violence will only lead to more violence. Anyone who believes that they can wage—and win—an armed revolt against the American police state is playing right into the government’s hands.

18. “We the people” are no longer shielded by the rule of law. While the First Amendment—which gives us a voice—is being muzzled, the Fourth Amendment—which protects us from being bullied, badgered, beaten, broken and spied on by government agents—is being disemboweled.

19. Government eyes are watching you. They see your every move: what you read, how much you spend, where you go, with whom you interact, when you wake up in the morning, what you’re watching on television and reading on the internet. Every move you make is being monitored, mined for data, crunched, and tabulated in order to form a picture of who you are, what makes you tick, and how best to control you when and if it becomes necessary to bring you in line.

20. By gradually whittling away at our freedoms—free speech, assembly, due process, privacy, etc.—the government has, in effect, liberated itself from its contractual agreement to respect our constitutional rights while resetting the calendar back to a time when we had no Bill of Rights to protect us from the long arm of the government.

21. Private property means nothing if the government can take your home, car or money under the flimsiest of pretexts, whether it be asset forfeiture schemes, eminent domain or overdue property taxes. Likewise, private property means little at a time when SWAT teams and other government agents can invade your home, break down your doors, kill your dog, wound or kill you, damage your furnishings and terrorize your family.

22. If there is an absolute maxim by which the federal government seems to operate, it is that the American taxpayer always gets ripped off.

23. Parents no longer have the final say over what their kids are taught, how they are disciplined, or what kinds of medical care they need. From the moment they are born to the time they legally come of age, young people are now wards of the state.

24. All you need to do in order to be flagged as a suspicious character, labeled an enemy of the state and locked up like a dangerous criminal is use certain trigger words, surf the internet, communicate using a cell phone, drive a car, stay at a hotel, purchase materials at a hardware store, take flying or boating lessons, appear suspicious, question government authority, or generally live in the United States.

25. Americans are powerless in the face of militarized police.

26. Despite the revelations of the past several years, nothing has changed to push back against the American police state. Our freedoms—especially the Fourth Amendment—continue to be choked out by a prevailing view among government bureaucrats that they have the right to search, seize, strip, scan, spy on, probe, pat down, taser, and arrest any individual at any time and for the slightest provocation.

27. Forced cavity searches, forced colonoscopies, forced blood draws, forced breath-alcohol tests, forced DNA extractions, forced eye scans, and forced inclusion in biometric databases are just a few ways in which Americans continue to be reminded that we have no control over what happens to our bodies during an encounter with government officials.

28. Finally, we all bleed red. And we all suffer when violence becomes the government’s calling card. Remember, in a police state, you’re either the one with your hand on the trigger or you’re staring down the barrel of a loaded gun. The oppression and injustice—be it in the form of shootings, surveillance, fines, asset forfeiture, prison terms, roadside searches, and so on—will come to all of us eventually unless we do something to stop it now.

These are not problems that can be glibly dismissed with a few well-chosen words, as most politicians are inclined to do. Nor will the 2016 elections do much to alter our present course towards a police state.

Indeed, the popularity contest for the new occupant of the White House will not significantly alter the day-to-day life of the average American greatly at all. Those life-changing decisions are made elsewhere, by nameless, unelected government officials who have turned bureaucracy into a full-time and profitable business.

As I point out in my book Battlefield America: The War on the American People, these problems will continue to plague our nation unless and until Americans wake up to the fact that we’re the only ones who can change things for the better and then do something about it. Indeed, the Constitution opens with those three vital words, “We the people.”

What the founders wanted us to understand is that we are the government.

There is no government without us—our sheer numbers, our muscle, our economy, our physical presence in this land. There can also be no police state—no tyranny—no routine violations of our rights without our complicity and collusion—without our turning a blind eye, shrugging our shoulders, allowing ourselves to be distracted and our civic awareness diluted.

No matter which candidate wins this election, the citizenry and those who represent us need to be held accountable to this powerful truth.

Contributed by John W. Whitehead of The Rutherford Institute.

Since 1996, John W. Whitehead has taken on everything from human rights abuses in Saudi Arabia, protection of religious freedom, and child pornography, to family autonomy issues, cross burning, the sanctity of human life, and the war on terrorism in his weekly opinion column. A self-proclaimed civil libertarian, Whitehead is considered by many to be a legal, political and cultural watchdog—sounding the call for integrity, accountability and an adherence to the democratic principles on which this country was founded.