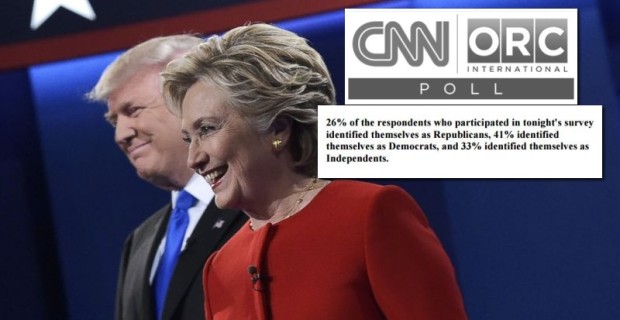 Asked, “Who do you think did the best job in the debate – Hillary Clinton or Donald Trump?”, 62% of respondents said Hillary while 27% said Trump.

This immediately gave the impression that Hillary trounced Trump in the debate, and set the standard for the media narrative that it was a bad night for the Republican candidate.

This represents a disparity of 15% between Democrats and Republicans – meaning the poll was heavily weighted in favor of Democrats before the question about who won the debate was even asked.

Almost three quarters of the respondents were not Republicans and 57% more Democrats were asked than Republicans. If the sampling was flipped, with 41% of respondents being Republican and just 26% identifying as Democrats, the outcome would almost certainly have been in Trump’s favor.

The text confirming that the poll had a huge disparity in favor of Democrats was not included in CNN’s website article about the poll, but can be found in a PDF file on CNN’s image server.

The CNN poll is contradicted by numerous other polls which show that Trump won the debate.

These polls have been disparaged by Hillary supporters, who claim they are unscientific and were gamed by pro-Trump trolls.

However, a Time poll that showed Trump ahead by 59% to 41% swung heavily in Clinton’s favor after she suddenly received a surge of nearly 300,000 votes – suggesting that both sides were involved in gaming the results.

For those claiming only Trump supporters gamed the online polls, Hillary got a sudden 300,000 vote swing in the Time poll. pic.twitter.com/27cfuTCb2o

While the consensus opinion appears to be that Clinton won on points but Trump achieved his mission of appearing electable, the gross bias exhibited in CNN’s sampling – along with moderator Lester Holt’s failure to ask Hillary any tough questions – will fuel accusations made by Trump supporters that the entire race is being rigged in favor of Hillary Clinton.