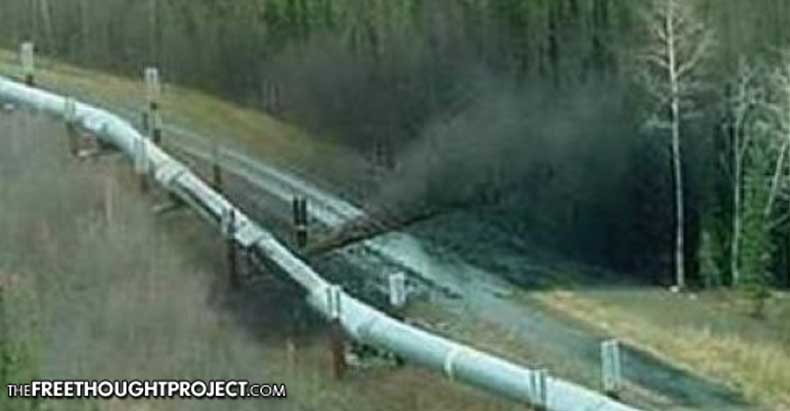 Construction of the Dakota Access Pipeline (DAPL) has demonstrated to the world how U.S. oil interests and government co-conspirators will let nothing stand in their way to reap billions from the continued exploitation of fossil fuels.

In securing the route for their 30-inch pipeline, Energy Transfer Partners has stolen land from private landowners through eminent domain, bulldozed their way through ancient Native American burial grounds, put hundreds of waterbodies at risk and is threatening the Missouri River water source of the Standing Rock Sioux tribe.

The tribe has fought to defend their water rights and sacred grounds from assault by corporate interests and governments salivating at the promised tax revenue, but have been defeated at almost every turn. Immense protests of Native Americans, and those standing in solidarity, have been met with private mercenaries and vicious attack dogs, cops carrying protesters off to jail, and even the National Guard.

The protests have drawn national and international attention, as DAPL represents the latest event in a long history of abusing the rights and property of Native Americans. Just last week, more than 1,200 archeologists, museum directors, and historians penned a letter to President Obama denouncing the deliberate destruction of Standing Rock Sioux ancient burial grounds.

Energy Transfer Partners rationalizes the construction of DAPL by saying that pipelines are a safer method of transporting oil than rail cars or trucks. In their FAQ, the company states:

“Underground pipelines are the safest mode of transporting crude oil. Monitored 24 hours a day, seven days a week and 365 days a year, including rigorous pipeline integrity planning and maintenance, federal statistics show that underground pipelines transport crude oil more safely than ships, rail, or trucks. In the United States, the U.S. Department of Transportation is responsible for ensuring safety of the design, construction, operation and maintenance of interstate pipelines

Energy Transfer has long standing commitments to the safety of people, the environment, and our property and assets. We do this because it makes good business sense, but more importantly, it is the right thing to do. These commitments are held as fundamental core values and are an integral part of us as a partnership and a corporate citizen.”

Spills are often located in remote regions, in or near sensitive environmental areas and sources of drinking water. They can be more difficult to contain and can leak for longer periods before being contained.

Pipeline companies do not want you to know the enormous amounts of oil and other toxic materials that spill from supposedly “safe” pipelines on a daily basis. The fact is, since 2009 when domestic oil production began ramping up, “the annual number of significant accidents on oil and petroleum pipelines has shot up by almost 60 percent, roughly matching the rise in U.S. crude oil production…”

The numbers are staggering. A 2015 analysis by the Center for Effective Government found:

“Since 2010, over 3,300 incidents of crude oil and liquefied natural gas leaks or ruptures have occurred on U.S. pipelines. These incidents have killed 80 people, injured 389 more, and cost $2.8 billion in damages. They also released toxic, polluting chemicals in local soil, waterways, and air.”

According to the Pipeline and Hazardous Materials Safety Administration, these spills and ruptures released over 7 million gallons of crude.”

The website displays a map of oil pipeline spills from 2010 to present, and it is discouraging to say the least.

Most of the spilled crude oil originates in Texas and…you guessed it…North Dakota – where DAPL will be carrying a half million barrels a day of crude oil from the Bakken and Three Forks fracking fields.

Clearly, the main selling point put forward by Energy Transfer Partners, and those who stand to reap billions from its construction, is a lie. Put in terms of the amount of crude oil spilled, pipelines are more dangerous than rail cars or trucks.

But this is not an appeal to continue relying on railroads and highways for transporting oil. The shocking data on oil spills, the threat to human health and the environment, and the assaults on the rights of landowners and Native Americans brought about by the DAPL construction point to one conclusion.

Now, more than ever, we need to speed our transition away from fossil fuels and fully embrace renewable energy. The technology is there, and the free market is making great strides to make this happen. But the corporatocracy still has an enormous grip in perpetuating the oil era, as we can plainly see in the construction of DAPL and the increased oil production through fracking.

The corrupt partnership of corporate behemoths and government players is keeping us mired in the era of oil, putting human and environmental health in ever greater risk with more and more pipeline construction.

Please help us combat the disinformation campaign of oil companies and the willful ignorance of mainstream media by sharing this article so the truth can be known about oil pipelines.