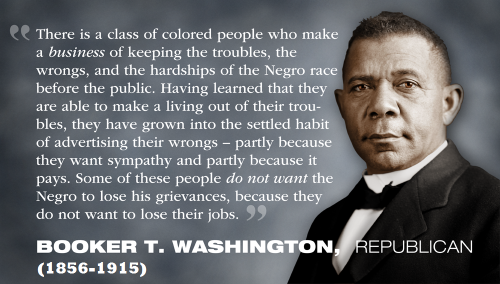 Booker T. Washington was right on the money (sorry for the pun).

Look under the rock of any liberal cause, you’ll find a slimy snake. The end game is always money.

As an example, a year ago, representatives of “developing nations” (Third World countries) to a UN Conference on Climate Change demanded more than $100 billion a year in “climate change” reparations.

Now, a UN panel has issued a report saying that the U.S. owes “African Americans” reparation for the history of slavery and “contemporary police killings”.

As reported by Ishaan Tharoor for the Washington Post, September 27, 2016, the UN panel is the United Nations’ Working Group of Experts on People of African Descent, a body of human rights lawyers and law professors who report to the international organization’s High Commissioner on Human Rights.

On Sept. 26, the group presented their findings to the UN Human Rights Council. The report says:

“In particular, the legacy of colonial history, enslavement, racial subordination and segregation, racial terrorism and racial inequality in the United States remains a serious challenge, as there has been no real commitment to reparations and to truth and reconciliation for people of African descent. Contemporary police killings and the trauma that they create are reminiscent of the past racial terror of lynching.”

Citing the past year’s spate of police officers killing unarmed black men, the panel warned against “impunity for state violence,” which has created, in its words, a “human rights crisis” that “must be addressed as a matter of urgency.”

Ironically, the same UN Working Group of Experts on People of African Descent conducted a fact-finding mission in the United States just this year in January, and hailed the strides that have been to make the U.S. criminal justice system more equitable.

Now, however, the Working Group has changed its mind. It said in a statement:

“Despite substantial changes since the end of the enforcement of Jim Crow and the fight for civil rights, ideology ensuring the domination of one group over another, continues to negatively impact the civil, political, economic, social and cultural rights of African Americans today. The dangerous ideology of white supremacy inhibits social cohesion amongst the US population.”

The reparations could come in a variety of forms, according to the panel, including “a formal apology, health initiatives, educational opportunities … psychological rehabilitation, technology transfer and financial support, and debt cancellation.”

The members of the Working Group of Experts on People of African Descent are:

See also “Attn: Useful Idiots! There’s a website for you to pay reparations to blacks“.