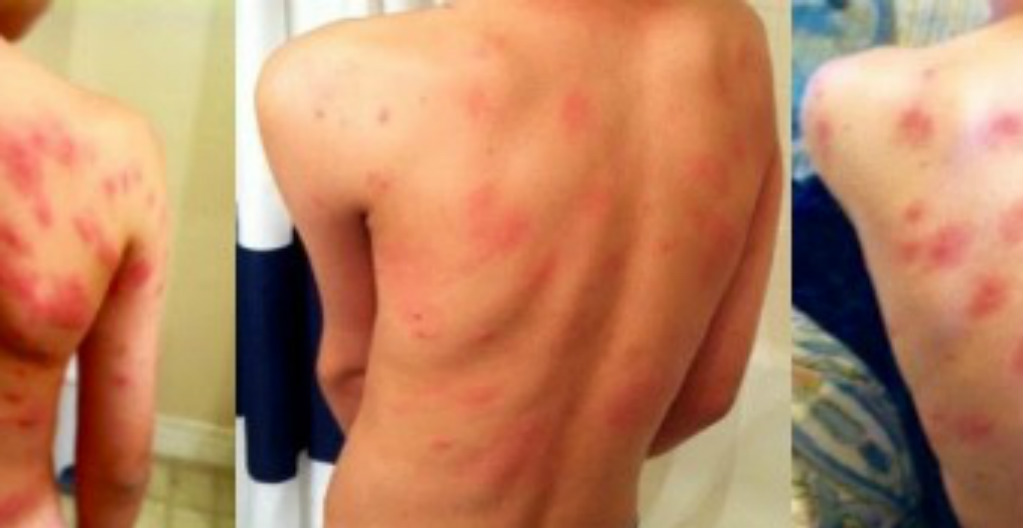 Here’s something you don’t see everyday… or ever. Well, health officials are claiming they’ve never seen it anyway.

Some 40 people including 30 students at Lake Forest Elementary in Orange County, California have broken out in massive, swollen, itchy “bites” (at least, they look like bites) all over their bodies with new cases coming in by the week.

School authorities claim that the bites aren’t from mosquitoes, chiggers, or mites. They’ve supposedly ruled bites out. The media is calling this a “rash-like skin irritation,” but those splotches definitely look like bites, not rashes.

So what’s biting the kids and staff at this elementary school? Vector Control has sprayed pesticides inside and outside of the entire school and they plan to do so again, but whatever is eating these people, it is clearly resistant to everything they’ve sprayed because the attacks keep coming.

On top of that, parents are furious with the school for apparently keeping the outbreak a secret. After so many cases coming out, the school was finally forced to hold a meeting over it (via KTLA5):

Parent Jennifer Dublin found a new bite on her daughter after the campus was sprayed. “I’m very concerned, I’m thinking about keeping my daughter out for the rest of the week at least,” she said.

She said that if the school had communicated the issue earlier, parents might not have been worried that they had bed bugs at home.

At the meeting, many parents were upset about the school’s lack of transparency and answers. Lake Forest Councilmember Adam Nick said it was that was “unacceptable.”

“Students are still coming to school. Maybe they should have shut down the school,” he said.

Considering how much pesticide and chemicals are dumped onto and into the environment on a daily basis, it’s silly to think that eventually over time these things wouldn’t have some cumulative effect and give rise to potentially dangerous mutations. We’ve already seen Monsanto’s Roundup give rise to superbugs and superweeds, for example. The overuse of antibiotics has also led to the creation of antibiotic-resistant bacteria.

So what’s going on here?

Have these pesticides led to the creation of a new type of bad ass mosquito? Then again, on the other side of the country the “officials” are releasing genetically modified mosquitoes to fight Zika, and the company admittedly can’t be sure of what that will lead to.