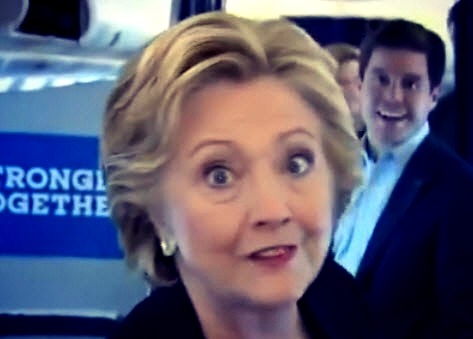 Even as she stands there with her self-gratified look, just oozing megalomania, Hillary’s eyes continue to betray her. Something is wrong. They continue to move independently in ways that could signal a serious underlying health issue.

After the debate, the press was asking Hillary what she thought about Donald Trump claiming he could have attacked her and Bill on personal matters during the debate but chose not to. Hillary responded with as much smarminess as she possibly could, and then tried to zing Trump at the end with, “Anybody who complains about the microphone is not having a good night.”

Especially when she turns and says that, look at her eyes. It’s like she can’t make them focus on any one thing and one is moving independently of the other.

Something is wrong with her, and not just psychologically.

See also: What Was Wrong with Hillary Clinton’s Eyes During Her Philly Speech?