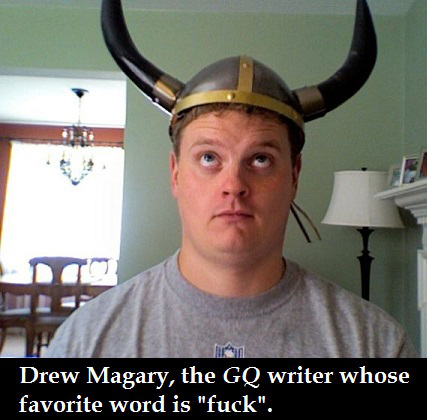 The 2016 presidential election is making an already divided America even worse. (See “NYT openly advocates abandoning objectivity in reporting on Trump” and “Professor says Trump is so bad, university class doesn’t have to be balanced“)

It is especially bad in Hollywood:

Here’s an example of liberal viciousness by a man I’d never heard of until today, Drew Magary, who writes for GQ.

In a column for GQ, Magary tells any and all Americans who’ll vote for Trump to “fuck you”. His column is politely titled, “If You Vote For Trump, Then Screw You,” which, no doubt, was the work of his editor, for in his column Magary is far less restrained, preferring “fuck” to “screw” and peppering his prose with, by my count, 11 “fuck” this and “fuck” that. Magary also uses the same, tired old stereotype of conservatives as ignorant, redneck racists. YAWN . . . .

Wikipedia has a bare-bones entry on Magary, identifying him only as a columnist for GQ and other publications, a “humorist,” and the author of 3 books, who was an English major at Colby College.

“Trump is a liar and a crook, and he commits abominable acts at such a frenetic pace that they get lost in the fury surrounding whatever horrible thing he does next. […]

Regardless, in the end, people are still gonna vote for this man. Maybe not enough to get him elected, but still: it’ll be in the tens of millions. (Note to the people causing the polls to fluctuate: What the fuck is wrong with you? […]

Nothing that Trump says, no damning piece of Trump reportage, and certainly no opinion piece like this one will stop his voters from pulling the lever. Nor will anything stop Trump from being the officious, braindead goon that he is. He will never answer for his crimes, and there’s a frighteningly large portion of the electorate that will always love him for that.

And so I’d just like to say to that portion of the electorate: Fuck you. No, seriously. Go fuck yourselves. […]

Nothing’s gonna take down Trump at this point, so I’m not gonna bother. No no, this post is for ME. I am preaching to the sad little choir in my soul here.

You know what? No, she’s not. She’s fine. I lived through one Clinton, and I can live through another. My reasons for hating Trump are better than your reasons for hating Hillary. Show me all the arguments against her you like. You guys don’t give a shit about facts and research when it comes to Trump, so I’m not gonna give a shit about whatever clumsy meme you cook up to explain why she did Benghazi. Nope. Sorry. Fuck your arguments, and fuck you. […]

Trump is human waste. He is the worst of America stuffed into a nacho cheese casing, and he is emblematic of the kind of arrogant, flag-waving, trashy, racist moron that the rest of us have to DRAG kicking and screaming into the 21st century: Cliven Bundy, Sean Hannity, Kim Davis, and on and on and on. […] These are needy hillbilly loons who are just as starved for attention as Trump himself. […]

If you vote for him, you’re not making America great again. You are killing it. […] And you are revealing your breathtaking ignorance to everyone except for yourself. I can’t believe you can’t see this. I want you to see this. I wanna shine a big fucking light in your face and scream at you that Trump isn’t even qualified to be human, much less President. How are you gonna change the system if you elect some corrupt idiot who has no clue how to DO IT, huh? Can’t you see this? Haven’t you heard this asshole talk? THE FUCK IS WRONG WITH YOU?

But I already know that’s a futile effort. So fuck you, and fuck the GOP leaders who are too – to stand up to you. I’m not gonna wish deportation or imprisonment or some kind of fantastical hyperbolic death upon you. I’m not gonna ask for a wall to be built on the Mason-Dixon line. No no, I think you people deserve the EXACT same fate as Trump himself, and that is to lose, badly. That’s what should happen to you. You and your hamburger puppet leader deserve to live the rest of your days arm-in-arm in disgrace, branded as losers for eternity. Because that’s what you are.”

Magary also actually believes that Hillary had pneumonia when she collapsed while leaving the 9/11 memorial ceremony.

Yeah right, a person who has pneumonia freezes up like this, and has to have the Secret Service grab you by the arm and shove you, face down, into a van.

And then, 1½ hours later, that same person with “pneumonia” whose whole body froze and collapsed into the van, bounces out of an apartment building, smiling and cheerful, declares, “I’m feeling fine!,” then bends down to greet a little girl, thereby infecting her with “pneumonia” as well.

But Magary says it’s we who don’t “give a shit about facts and research.” Too funny.

The most charitable thing I can say about Magary is that he has Tourette’s Syndrome. I can’t believe anyone actually paid money to buy his books.

Dr. Eowyn’s post originally appeared at Fellowship of the Minds