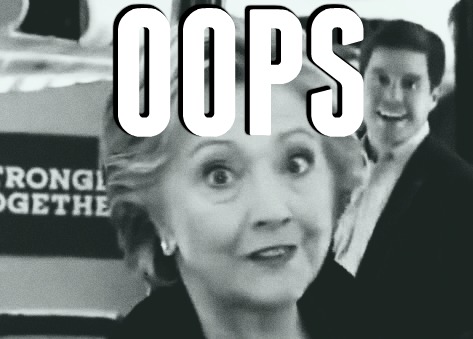 As if Hillary hadn’t already alienated half the country with her “Basket of Deplorables” comment, now hacked audio released of a speech Hillary gave at a fundraiser she attended in February has her referring to Bernie supporters as ‘parental basement dwellers’ who are buying into the false promises of free college and healthcare… one of which Hillary herself has been promising lately.

“There is a strain of, on the one hand, the kind of populist, nationalist, xenophobic, discriminatory kind of approach that we hear too much of from the Republican candidates…. And on the other side, there’s just a deep desire to believe that we can have free college, free healthcare, that what we’ve done hasn’t gone far enough, and that we just need to, you know, go as far as, you know, Scandinavia, whatever that means, and half the people don’t know what that means, but it’s something that they deeply feel.”

“Some are new to politics completely. They’re children of the Great Recession. And they are living in their parents’ basement. They feel they got their education and the jobs that are available to them are not at all what they envisioned for themselves. And they don’t see much of a future. If you’re feeling like you’re consigned to, you know, being a barista, or you know, some other job that doesn’t pay a lot, and doesn’t have some other ladder of opportunity attached to it, then the idea that maybe, just maybe, you could be part of a political revolution is pretty appealing.”

The problem here is that Hillary has been the one promising tuition-free college now, Sanders-style.

Obviously her own words caught on tape prove she’s offering “a false promise” — Hillary’s free tuition plan is another blatant lie she has never intended to deliver on.

The hacked audio supposedly came from a staffer’s account, but the timing of its release cannot be missed. This fundraiser happened in February, and yet the audio just so happens to get leaked now, the very same week that Sanders has hit the campaign trail to specifically convince millennials to vote for Hillary.

How likely is that now? Millennials don’t get their news from the mainstream media; they get it from social media, where#basementdwellers is currently trending and the #BasketofDeplorables are saying “Hey! Come over to our side, we’ve got plenty of room for more!”