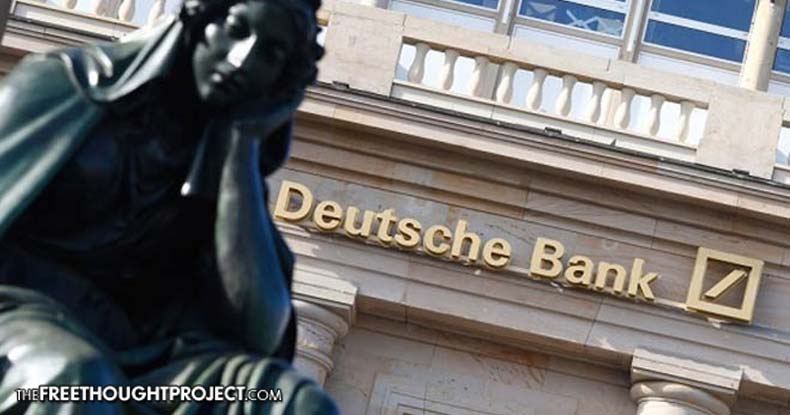 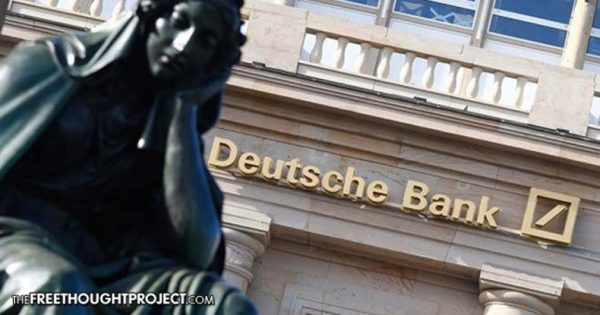 As the Free Thought Project reported Thursday, the most prominent bank in Germany is at risk of failure, with potentially profound effects for the EU, the United States and likely the rest of the world. This risk of failure has now gotten so threatening that a number of funds that clear derivatives trades with Deutsche Bank AG have withdrawn excess cash and positions held at the lender, according to Bloomberg.

While the vast majority of the bank’s more than 200 derivatives-clearing clients have made no changes, the hedge funds run on cash highlights serious concern. The paranoia of an imminent collapse spread to the US on Thursday as 10 hedge funds that are Deutsche Bank clients have decided to withdraw cash and listed derivatives positions from the bank, according to a Bloomberg News report.

Millennium Partners, Capula Investment Management and Rokos Capital Management are among about 10 hedge funds that have cut their exposure, said a person familiar with the situation who declined to be identified talking about confidential client matters.

The hedge funds use Deutsche Bank to clear their listed derivatives transactions because they are not members of clearinghouses. Millennium, Capula and Rokos declined to comment when contacted by phone or e-mail.

As Zero Hedge points out, this massive withdraw of cash has led to a sharp increase in short-term CDS. “Our trading clients are amongst the world’s most sophisticated investors,” Michael Golden, a spokesman for Deutsche Bank, said in an e-mailed statement.

“We are confident that the vast majority of them have a full understanding of our stable financial position, the current macroeconomic environment, the litigation process in the U.S. and the progress we are making with our strategy.”

But this is simply not true. Deutsche Bank is anything but stable as their shares have fallen sharply on the news that German Chancellor Angela Merkel won’t bail them out. Its shares fell by as much as six percent in early Monday trading, making it the worst performance since 1992. Since January, the bank’s shares have lost over 52 percent of their value.

As news of the bank run spread on Thursday, the ‘stable’ bank’s shares declined below 10 euros for the first time. The lender’s 1.75 billion euros ($2 billion) of 6 percent additional Tier 1 bonds, the first notes to take losses in a crisis, fell as much as five cents on the euro to 69 cents, a record low, according to data compiled by Bloomberg.

“The issue here is now one of confidence,” said Chris Wheeler, a financial analyst with Atlantic Equities LLP in London. “That’s what’s going on here. The thinking is ‘Deutsche Bank is fine, but there’s a slim chance it might not be, so why leave my money in there?’”

The possibility of depositors having their funds taken from them as the bank collapses is not at all isolated as it has happened before. As we pointed out, to keep the bank solvent, the Bank of Cyprus took almost 40% of depositor’s funds – leaving customers with essentially nothing they could do about having their money stolen. Assets were frozen and ATM machines were not refilled.

As Jay Syrmopolous points out, the collapse of Deutsche Bank would most likely begin a cascade of Western banking institutions falling like dominos (which could include Barclays in London and CitiGroup in the U.S.). According to same expert who valued Lehman’s worth at its collapse, Deutsche Bank’s current value of $1 trillion dollars is significantly more than Lehman Brothers’ valuation during their collapse in 2008.

The graphic below shows the severity of the impact and implications for contagion a Deutsche Bank implosion would have.

In fact, the contagion has already begun. News that some hedge funds were pulling positions and excess collateral from Deutsche Bank caused shares of U.S. banks to quickly reverse early gains, according to Bloomberg.

But don’t worry, just as Lehman Brothers maintained in the beginning of 2008 that everything was fine and dandy, Deutsche Bank is doing the same.

In a memo to staff published on Friday, as reported by Bloomberg, Deutsche Bank Chief Executive Officer John Cryan responded to what he called media speculation causing some “unjustified concerns,” saying that the bank’s balance sheet has never been more stable over the past two decades.

“Ongoing rumors are causing significant swings in our stock price,” he wrote. “It’s our task now to prevent distorted perception from further interrupting our daily business. Trust is the foundation of banking. Some forces in the markets are currently trying to damage this trust.”

However, even the IMF has called their bluff, noting that “Deutsche Bank appears to be the most important net contributor to systemic risks.”