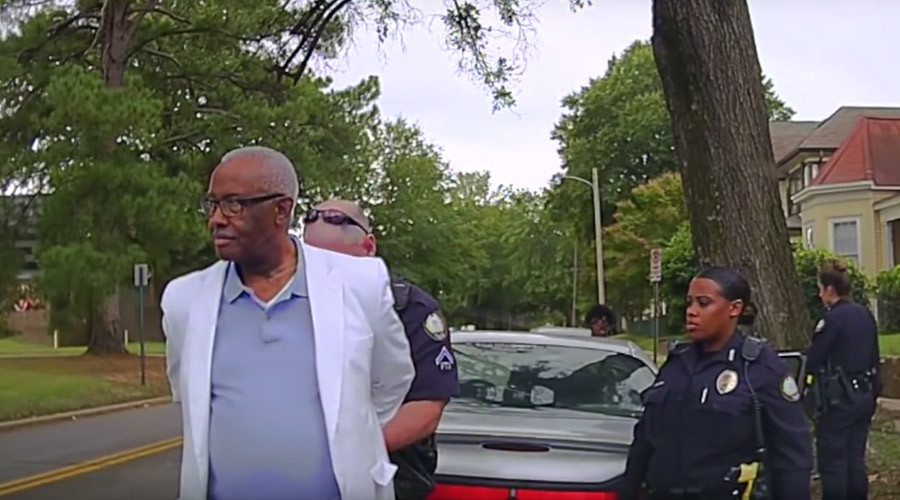 An Arkansas politician who helped pass state legislation protecting people who film the police, has been arrested for… filming the police.

Representative John Walker was arrested by Little Rock police on Monday for filming the arrest of a driver and his passenger following a traffic stop and charged with “obstruction of government relations”.

“I’m just making sure they don’t kill you,” said Walker to the driver being pulled over and subsequently arrested for an outstanding warrant, according to the police report.

“I ordered Walker several times to leave or be arrested. Walker replied ‘arrest me’ at which point I did,” wrote the arresting officer.

Walker’s associate, lawyer Omavi Shuker, 29, was also arrested at the scene for walking between the police vehicle and pulled over car.

LRPD released dashcam footage of the incident so members of the public could see how the situation unfolded.

By Tuesday, the Little Rock Police Department realized they had slipped up and dropped the charges against Walker, released a formal letter of apology and issued a full refund of his $1,000 bond. However, the charge against Shuker is still pending.

Walker rejected the city’s apology for their reluctance to recognize “pervasive racial bias in some quarters of the police department” and for their decision to uphold the charges against his colleague.

“It’s a mess,” said president of the Fraternal Order of Police, Tommy Hudson, to the Arkansas Times. “It’s a bad situation for everyone involved,” he added.

Hudson went to reiterate that members of the public are well within their rights to film law enforcement.

READ MORE: My name is ‘Idiot’: Ark. couple arrested for child abuse after zip-tying 4yo girl to bed

Walker co-sponsored the passage of a 2015 bill protecting the right of citizens to film events in public places, Arkansas was the first state in the country to adopt such a legislation.