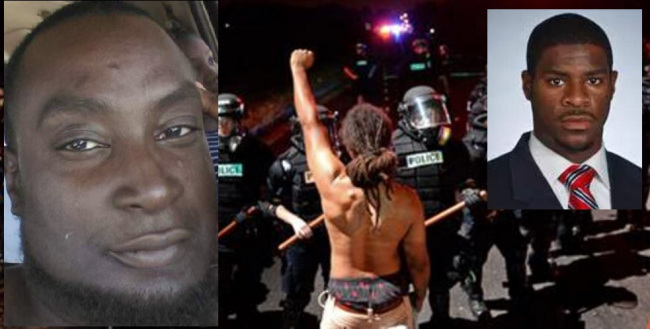 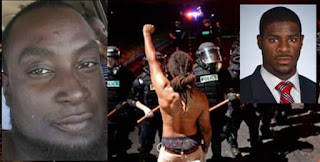 Scott’s wife had taken out a restraining order against him and warned that he was dangerous because he carried a gun.

Nothing says “quiet” like “assault with a deadly weapon with intent to kill” and nothing says “family man” like assaulting women and children.

Keith Lamont Scott, the latest martyr of Black Lives Matter and its media propaganda corps, was shot while waving a gun around. He had spent 7 years in jail for “aggravated assault with a deadly weapon.”

This vicious monster’s career of crime ended when he was shot by Brentley Vinson, an African-American police officer, protecting himself from the latest rampage by this “quiet family man.”

Brentley Vinson is everything that Scott isn’t. The son of a police officer, Brentley dreamed of following in his father’s footsteps. He used to organize his football team’s bible studies and mentored younger players. Former teammates describe him as a “great guy” with “good morals.” His former coach calls him a “natural leader” and says that, “We need more Brent Vinsons… in our communities.”

Except that Obama, Black Lives Matter, the media, the NAACP and everyone else going after this bright and decent African-American officer has decided that what we really need are more Keith Lamont Scotts. And the streets of Charlotte are full of “Scotts” throwing rocks at police, assaulting reporters and wrecking everything in sight in marches that are as “peaceful” as Scott was a “quiet family man.”

That’s what Hillary Clinton wanted when she tweeted that, “We have two names to add to a long list of African-Americans killed by police officers. It’s unbearable, and it needs to become intolerable.”

What exactly should be intolerable? An African-American police officer defending his life against a violent criminal who happened to be black? Should black criminals enjoy a special immunity? The greatest victims of black criminals are black communities.

Tim Kaine, Hillary’s No. 2, wants us to think about Scott’s family. We should do that. Scott’s brother announced on camera that all “white people” are “devils.” Timmy should check to see if he can get an exemption from white devildom. But if there are any white devils, it’s men like Kaine and women like Hillary who enable the worst behavior in a troubled community while punishing those who try to help.

Every time the lie about “peaceful” protests is repeated, another black community becomes unlivable.

Twenty police officers have been injured and National Guard troops have arrived to deal with all those “peaceful” protests. Protesters chanted, “Black Lives Matter” and “Hands Up, Don’t Shoot” before throwing things at police and then peacefully shooting each other. Stores had their windows broken and decorated with Black Lives Matter graffiti. A Walmart was peacefully looted and trucks were torched.

A police officer was peacefully hit by a car. Another was peacefully hit in the face with a rock. Mobs besieged and attempted to break into hotels. Reporters were attacked and a photographer was nearly thrown into a fire. White people were targeted by the racist Black Lives Matter mob and assaulted.

But all these peaceful rioters are probably just quiet family men too.

The peaceful protests are as big a lie as the “bookish” Keith Lamont Scott reading a book in his car. Police had no trouble finding a gun. They couldn’t have found Scott anywhere near a book. The only thing he could have done with a book is try to beat someone to death with it. Maybe a child.

Scott wasn’t a quiet family man; he was a violent criminal with a horrifying vicious streak. He and the rest of the Black Lives Matter rioters remind us of the monsters that we need dedicated police officers to protect us from.

The spin on what happened between a deranged black criminal and a courageous black police officer fell apart as fast as the Freddie Gray case, where black police officers were targeted and a city terrorized over conspiracy theories relating to the accidental death of a drug dealer.

The claims of racism are absurd. Not only was Scott shot by an African-American police officer, but Charlotte Police Chief Kerr Putney, who has taken the lead in defending him, is also African-American.

That’s the laughable premise of the racist Black Lives Matter hatefest that alternates between “Stop killing us” street theater and violent assaults on police officers, reporters and anyone in the area.

But the truth doesn’t matter. Black Lives Matter rioters are still chanting, “Hands Up, Don’t Shoot” long after the Michael Brown lie fell apart. They’re holding up signs reading, “It Was a Book.” The lie is backed by some of the biggest media corporations in the country, by $130 million from George Soros and the Ford Foundation, by Barack Hussein Obama and by Hillary Clinton.

These are the malign forces destroying Charlotte, as they trashed Baltimore. On the ground there are the vulture community organizers of Black Lives Matter, funded by the left, who parachute in to organize race riots, behind them are the reporters who sell the spin live on the air and the photographers who capture glamor shots of the racist rioters, and after them come the lawyers of the DOJ out to ruin, terrorize and intimidate whatever law enforcement survived the riots.

They did it in Ferguson and a dozen other places. Now they want to do it in Charlotte.

This is the real evil in Charlotte. And we need to stand up to it. From the ghetto to the manors of the liberal elite from burning cars to pricey restaurants in exclusive neighborhoods, it plots against us.

It is a lie repeated a million times. Sometimes the lie is simple. Other times it’s sophisticated. But the way to fight it is to begin with the truth.

The truth is that Keith Lamont Scott was a violent criminal who came to a bad end because of his own actions. Just like Michael Brown, Freddie Gray and too many other Black Lives Matter martyrs to count.

The truth is that everything Black Lives Matter does reminds us of why we need police officers.

It’s about what kind of country we want to be. Is it a country that celebrates a young black football player who chose to follow in his father’s footsteps, who organized bible study and helped others, who risked his life to keep other people safe. Or is it one that celebrates Keith Lamont Scott, who assaulted a woman, a child and anyone else he could get at, who terrorized three states and died as he lived.

Obama and the left want a nation of Keith Lamont Scotts. But now it’s our turn to choose.