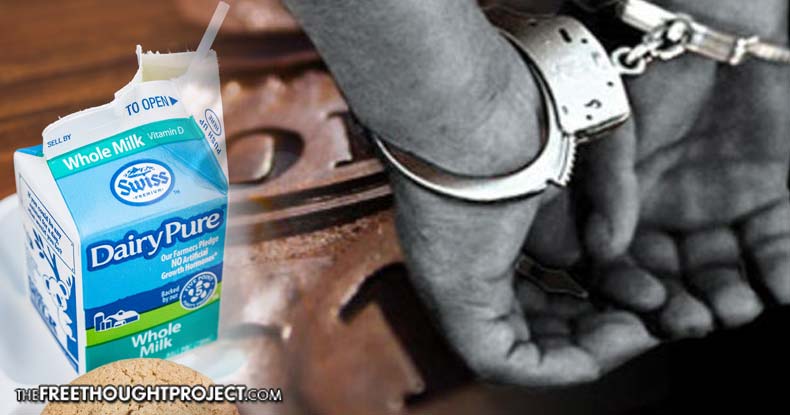 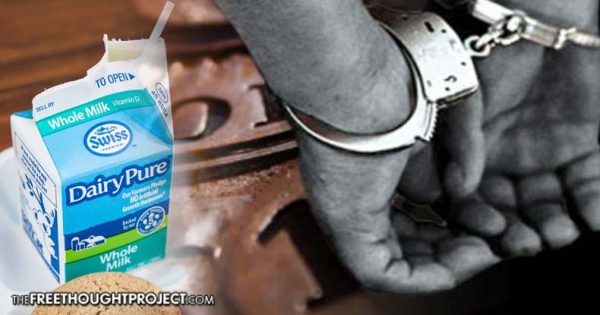 Now that a police state is all-but officially upon us, a 65-cent carton of milk can be cause enough for arrest and criminal prosecution — even at 14 years of age, and even when that milk should have been free in the first place.

Virginia teen, Ryan Turk, forgot to grab the carton of milk, included in the free lunch program he receives, the first time he made his way through the Graham Middle School cafeteria line on May 10 — so he doubled back to grab it.

A school resource officer saw the teen cutting in line and assumed he’d stolen the milk — and accused him of concealing the carton. In defiance, the teen threw the carton back. When Ryan refused the officer’s orders to see the principle, and remained uncooperative, he was arrested, cuffed, and charged with disorderly conduct and petit larceny.

Over a 65-cent carton of — free lunch program — milk. In a middle school cafeteria. In 2016. Have we really come to this?

Ryan, who insists he did nothing wrong, refused an offer of punishment not involving the court system, and, defying all rationality, now has a court date for November set by a Prince William County judge last week, the Washington Post reported — just days after he turns 15.

Shamise Turk, the teen’s mother, also asserts her son did nothing wrong by grabbing the milk carton since it should have been included with the free lunch.

Emmett Robinson, an attorney representing the family, says this is a case of targeting and racial discrimination — and that Ryan, who is black, refused to obey the school resource officer because he’d done nothing wrong.

“No one needs to be punished for stealing a 65-cent carton of milk,” Robinson told the Post. “This officer treats kids like they’re criminals, and guess what happens — they’re going to become criminals.”

Ryan had not been in trouble prior to this arrest.

As the Post points out, a legitimate case for targeting students by race can certainly be made, because, for one, “Studies show that black students are subject to more frequent — and harsher — discipline than their peers and that there are biases against them that begin as early as prekindergarten classes.”

But the school vehemently disputes the allegations Ryan was targeted because he is black — or that the 65-cent milk carton incident had anything to do with race. Prince William County schools noted both the officer who arrested the teen and the principal of the school are black.

“All the key parties involved, including the principal and the police officer, are African American,” Prince William County schools spokesman Phil Kavits said in a statement quoted by the Post. “The staff members are well known in our highly diverse community for their dedication and caring approach to all students.”

Kavits did not elaborate on how, exactly, that caring approach applied in the case of not only arresting, but prosecuting a 14-year-old over a 65-cent carton of milk — even if Ryan had actually stolen it.

“It’s not the players, it’s not the people who discriminate; it’s the whole system,” the attorney told the Post. “The system is set up now so that school resource officers get to determine the impact on a person’s life.”

Case-in-point, the disorderly conduct portion of charges Ryan faces were derived from behavior one would expect from a young teenager accused of something he did not do. However, on paper, particularly should he be convicted, disorderly conduct could be interpreted quite negatively in possible future interactions with police.

Prince William Police spokesperson Sgt. Jonathan Perok told the Post that as the officer escorted Ryan to the principal’s office, he “leaned back and pushed against the officer,” and when they neared the principal, he attempted to “push past the officer to get away.”

Worse, the family’s account of events contradicts that of the school and police.

Shamise Turk works for the school district and has seen surveillance footage of the incident — and says her son absolutely did not conceal the carton of milk. Ryan explained, according to the Post, he had returned to his seat in the cafeteria when the officer confronted him and went to put it back — but the cop told him to take it with him to see the principal, and then grabbed his neck.

“It’s just unfair,” Ryan told the outlet. “Other people did that. One boy, I told him to get one for me before. But when I do, I get in trouble.”

The family reiterated they declined to resolve the incident through a nonjudicial diversion program because the middle-schooler is innocent of any wrongdoing.

“My son is not going to admit to something he did not do,” Shamise asserted.

Innocent or not, the absurdity of prosecuting a 14-year-old for stealing a carton of milk likely not even worth its 65-cent price tag cannot be emphasized sufficiently. Not only are the Turks in a financial situation deeming Ryan worthy of receiving the county’s free lunch program, now taxpayers will foot the bill for his criminal prosecution.

Minors charged with misdemeanor crimes aren’t ordinarily named by the Washington Post, but Ryan and his family wanted to call attention to this case.

In short, no one wins — but at least the world can witness in a direct example the authoritarian shift taking place before our eyes.