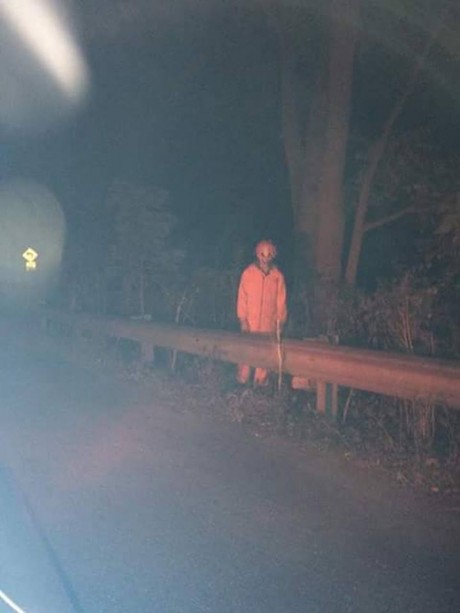 What would you do if you suddenly saw a creepy clown on the side of the road in the middle of the night?

Something very strange is going on right now in this country and it involves random appearances of and threats by what are some people’s worst nightmare: creepy clowns.

That’s weird to even write, but what’s happening seems straight out of Stephen King’s IT!.

In at least ten states, creepy clowns have randomly appeared and scared the crap out of people, sometimes armed with weapons, sometimes chasing people into their homes, sometimes trying to lure kids into the woods with money or treats, or following them home from the bus stop like Michael Myers in the film Halloween. 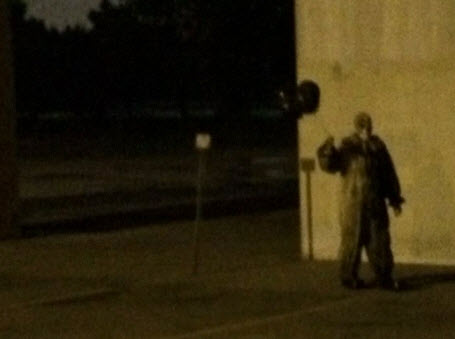 This guy was spotted in Green Bay, Wisconsin back in August.

In some places, the creepy clowns just stand there… eerily staring at people in silence.

According to USA Today, it mostly began in the Carolinas and Georgia, where clowns tried to pay kids to come into the woods with them, then the sightings spread to Mississippi with a hoax involving fake threats by school kids in Alabama. The clown in Mississippi was carrying a machete, but got away after a patrol car was sent out. He hasn’t been spotted since.

After the Southwest creepy clown tour, clown scares began popping up in the Northeast, this time in Virginia and Maryland. Then down in Florida, where a woman saw a creepy clown emerge from behind a tree and stare at her while she was walking her dog. The following day some school kids in the same area were followed home off the school bus by a creepy clown.

This guy was spotted in someone’s headlights driving past a Chicago cemetery last year… but it gives you the idea.

Then it all took a turn for the deadly when a tenth-grader from Pennsylvania was fatally stabbed by someone wearing a clown mask. The killer hasn’t been caught. In Ohio a kid was arrested for clown threats, but then a woman was attacked by a man in a clown suit. Still in another Ohio city, cops were called on two creepy clowns, one holding a butcher knife. They also got away.

Threats and sightings keep rolling in nationwide and people are on edge. Several schools in Austin, Texas for example announced today they also received clown threats to specific schools in the district on social media, just as the creepy clowns have been spotted for the first time across North Texas. A 13-year-old girl also got caught today sending a creepy clown threat to her Philly school threatening to shoot all the kids and teachers. 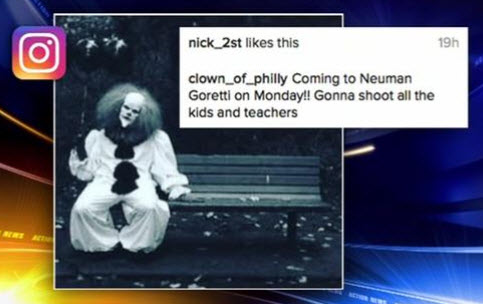 Another hoax by a kid.

However, in most of these instances (that aren’t hoaxes perpetrated by little kids), the creepy clowns show up, scare people or threaten them with weapons, then vanish before the police can catch them. None of the truly creepy ones have been caught yet.

Here’s a video of a creepy clown sighting out of Detroit that’s going viral on social media right now.

Hoax? Maybe. But many of them aren’t.

So the real question is: what in the hell is going on here?

Some say it’s a viral movie campaign for a horror film in the lead up toward Halloween, but what’s happening can’t just be some viral movie campaign anymore. If it was, it has gotten out of hand with psychotic copycats running around everywhere. But if it was just a film campaign, this is getting to the point that the movie behind it would be demonized and boycotted by pissed off people everywhere who really do hate clowns and whose children have been frightened or hurt. The people involved in this, whatever it is, are breaking laws now. The law enforcement involved in at least ten states now could sue the film studio for all the 9-1-1 calls where officers have been sent out to scared residents’ homes where clowns have chased them into their house like the Ohio woman in this 9-1-1 call:

…and the scores of police sent out to concerned schools that have received threats and had to go on high alert thinking at any moment clowns are going to descend on the campuses and start kidnapping or hurting kids.

Something else is clearly up. So is this a psyop? A mass mind control experiment?