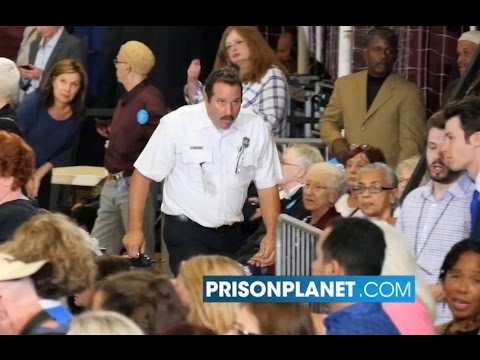 Footage captured by Millie Weaver shows the hospital bed being moved as Clinton supporters wait patiently for Hillary to appear.

Moments later, a Clinton staffer is seen looking nervous while taking photos of Weaver and her cameraman.

The video then shows an EMS worker exiting the backstage area with a stressed look on his face. Hillary’s security staff also look nervous before Clinton finally appears.

“They’re trying to get a feel for the crowd to see if the crowd is getting upset or impatient,” remarked Weaver.

Video from earlier in the day in Toledo showed Hillary popping another lozenge, suggesting her coughing problems have not gone away.

As we reported last month, the gurney was also spotted during Hillary’s event in Cleveland, Ohio, which was notable for the fact that Clinton suffered a 4 minute coughing fit during her speech.