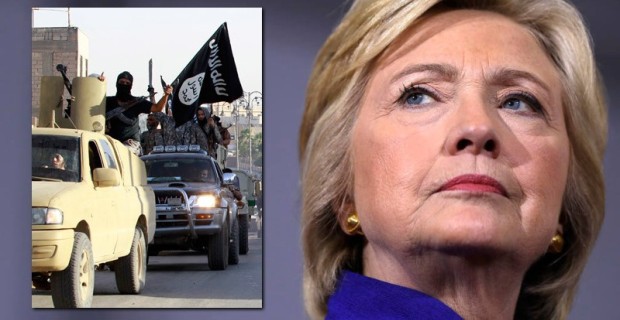 Hillary Clinton personally nixed a peace deal in Libya that would have led to free elections and prevented the country being seized by ISIS, all because of a personal vendetta she had with Muammar Gaddafi, according to explosive new claims made by a whistleblower who personally oversaw the negotiations.

Colonel Gaddafi personally invited Dr. Paul to Tripoli, Libya for peace talks having looked up to Paul as a spiritual leader since 1992 and having been impressed with the evangelist’s counseling work with King Hussein of Jordan and Yasser Arafat.

Dr. Paul arrived in Libya on August 5, 2011 with a contingent of Indian Members of Parliament and others on his peacekeeping team. Upon hearing of their arrival via press reports, General Wesley Clark encouraged Dr. Paul to try to negotiate a settlement between the U.S. State Department and Gaddafi in order to put a halt to the brutal conflict.

Over the course of ten days, an agreement was reached between Libyan Prime Minister Baghdadi al-Mahmoudi, President Muammar Gaddafi and the U.S. State Department in coordination with the Obama White House. The deal was overseen by General Clark as well as U.S. Rep Dennis Kucinich.

Under the terms of the deal, detailed below in an official letter signed by Prime Minister Baghdadi al-Mahmoudi on August 19, 2011, Gaddafi agreed to cease hostilities and immediately move towards holding democratic elections that would put an end to his own 42-year dictatorship.

Another letter sent by Khaled Kaim, then Deputy Foreign Minister of Libya, thanks Dr. Paul for doing “whatever it takes to promote peace and stop war.”

Had this deal gone through, it would have saved countless lives that were lost in the aftermath, prevented the collapse of Libya into a failed state fought over by rival jihadist gangs and significantly alleviated the international migrant crisis that worsened dreadfully in the years that followed. It could even have contained ISIS’ spread across the Middle East. The Benghazi attack would never have happened.

According to Dr. Paul. General Clark was so pleased with the outcome of the negotiations that he personally arranged a teleconference with Hillary Clinton on the line to congratulate Dr. Paul on “getting the job done in the face of such danger.”

But there was a problem.

Secretary of State Hillary Clinton didn’t want peace. She wanted Muammar Gaddafi dead for her own selfish, spiteful reason – the fact that Gaddafi had favored Barack Obama over her own campaign during the 2008 presidential election cycle.

“It’s well known in Libya that Gaddafi supported Obama over Clinton in the run up to the ‘08 elections, despite the Clinton team approaching Gaddafi’s son, Saif al-Gaddafi, and asking the family to invest in Hillary’s campaign and foundation, which they did not,” said Dr. Paul.

Hillary nixed the peace deal. The war continued. Libya – the most prosperous nation in Africa – fell into the hands of jihadist militants and subsequently ISIS. Thousands of migrants have since drowned in their desperate attempts to flee the country.

Gaddafi’s public execution was celebrated by Clinton during her now infamous television appearance when she exclaimed; “We came, we saw, he died!”

“Her personal vendetta better explains her oddly giddy behavior when taking credit for Gaddafi’s horrifying death, as captured on video for the world to see,” asserts Dr. Paul, adding that the footage “is evidence of a pathology or mental illness.”

Libya subsequently fell to jihadist rebels allied with Al-Qaeda, militants who had killed U.S. troops in Iraq and went on to kill four Americans during the Benghazi siege – all because Clinton had a personal vendetta with Gaddafi over his support for Barack Obama.

According to Dr. Paul, other Middle Eastern nations rushed to make substantial donations to the Clinton Foundation, fearful that they would be the next victims of Hillary’s wrath.

“Clinton’s penchant for the violent overthrow of less than cooperative governments knows no end, and they know it,” said Dr. Paul, adding that GCC member states Bahrain, Kuwait, Oman, Qatar, Saudi Arabia, and the United Arab Emirates are all “silently terrified at the prospect of Hillary Clinton becoming the next President of the United States.”

“Why is anyone who knew anything about Clinton’s overthrow of Gaddafi dead, missing, in prison, or their good name besmirched and their voice silenced?” asks Dr. Paul.

“Chris Stevens, my friend who helped negotiate peace in Libya is dead despite hundreds of his desperate pleas for more security – that was hardly a mistake. For that matter, where is my friend the Prime Minister who in good faith signed the peace agreement Clinton asked me to negotiate? Where is the Under Secretary who signed the other letter?”

It is important for the reader to understand that the Clinton-mouthpiece mainstream media will try to discredit this report by attacking Dr. Paul’s credibility.

However, Dr. Paul’s account is backed up by former Congressman and civil rights leader Walter E. Fauntroy (pictured below), who also visited Libya on a peace mission and was subsequently holed up with journalists at the Rixos Al Nasr hotel.

During his time in Libya, Fauntroy claimed that he witnessed Danish and French special forces committing atrocities against Libyan civilians and rebel fighters to be blamed on the Libyan government.

After the war, Fauntroy disappeared for five years, reportedly over allegations he had written a fraudulent check for $55,000, although the Congressman says he fled because he feared he would be assassinated to prevent him revealing what he had witnessed in Libya.

Dr. Paul also claims he was personally warned by a CIA agent that his life, “was in danger not from the war but from Secretary Clinton herself,” and that Clinton had a hand in ordering his subsequent arrest in order to besmirch his reputation.

“I have spoken with former Congressman Walter Fauntroy and I have researched his account of his experiences in Libya,” Corsi told Infowars.

“My conclusion is that Fauntroy is 100 percent credible and telling the truth. He confirms what I have already put into print about various other efforts to have Gaddafi abdicate that were ignored or otherwise rebuffed by the Clinton State Department.”

Dr. Paul’s claims are consistent with reports that Clinton refused to take a Skype call from Moammar Qaddafi’s son Saif, who was also trying to broker a peace deal.

Dr. Paul is vehement in laying the blame for the subsequent disaster in Libya firmly at the feet of Hillary Clinton, adding that the entire scandal “makes Watergate look like child’s play.”

“The image of bodies of women and precious children piled high in the streets of Tripoli will haunt me forever—not to mention the millions of others who lost their homes and lives, becoming part of the massive wave of displaced immigrants seeking asylum,” said Paul.

He notes that stockpiles of world class weaponry disappeared shortly after the country fell to jihadists, creating a “brand new safe haven for ISIS in place of the Western-friendly, non-nuclear aspiration state Libya had become,” adding that this outcome was “directly attributable to Ms. Clinton’s self-serving and duplicitous foreign policy.”

“Any fifth grader would have insisted Clinton’s “regime change” at-any-cost was absurd in the absence of a succession plan and troops on the ground, essentially handing the very strategic territory and its assets over to whoever wanted them most, which not surprisingly turned out to be Islamic terrorists. The entire world is paying a high price for her stupidity and horrific decision by further radicalizing the Middle East,” asserts Dr. Paul.

Dr. Paul is adamant that emails will soon be revealed that confirm all of his claims. He is also demanding that, “General Clark should be brought before a Senate sub committee and forced to testify under oath immediately.”

Dr. Paul personally endorsed Donald Trump back in February, although he is bipartisan, having supported Barack Obama back in 2008 over his opposition to the Iraq war.

Dr. Paul concludes that he is putting his life at risk by revealing Hillary’s role in nixing the Libyan peace deal, but that he can no longer hold back.

“Anyone who knows too much about this deplorable former Secretary’s actions turns up dead like Chris Stevens or Gaddafi,” states Paul. “Still, there is far too much at stake for this great nation, America, for me to remain silent any longer. I know I’m risking my life going public with what I know—but God will hold me accountable if I know the truth and do not speak it for fear of Clinton.”