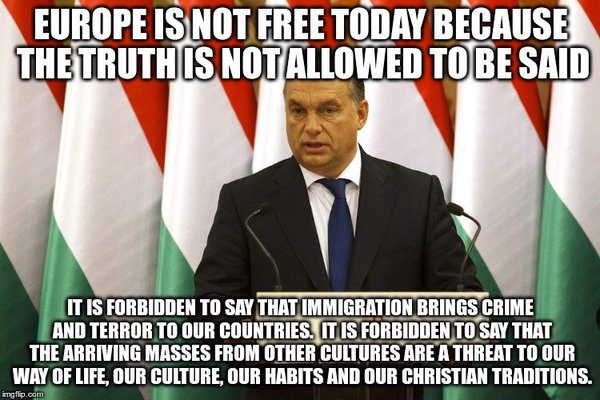 The divide between East and West, Christian and Muslim just became deeper after not only the Hungarians voted against the European Union’s Muslim “quotas” for Hungary, but they rejected it by an overwhelming 98% margin:

98.3% of Hungarian voters have rejected mandatory EU asylum seeker quotas in a referendum proposed by PM Viktor Orban. But the opposition boycott of Sunday’s ballot appears to have worked, as turnout failed to clear the key 50 percent threshold.

Only 1.7 percent of the voters answered ‘Yes’ to the question “Do you want the European Union to be able to mandate the obligatory resettlement of non-Hungarian citizens into Hungary even without the approval of the National Assembly?”

But the turnout of 43.8 percent, or 3.6 million voters, means that the referendum will be declared invalid. Over 200,000 ballots were spoiled, another tactic by those opposing the vote.

The referendum was non-binding, but became a symbolic litmus test for Orban’s pro-sovereignty, anti-migrant and anti-Islamist policies.

His mostly left-wing political opponents rejected the very idea of the referendum, suggesting it would cause “tension”inside the country and in Budapest’s relationship with Brussels, and urged a boycott to prevent a validating turnout. (source)

Now while the election is being called “invalid” by both the European Union and the overwhelming minority of Hungarians because less than 50% of the overall population voted, and while the referendum is considered “non-binding,” the message here is clear as the sky on a sunny day: Hungary, and for that matter, Eastern Europe, wants nothing to do with either Islam or Muslims, and the EU can keep their Muslims and plans for forced Islamization of Europe.

Eastern Europe has a long history with Islam, as they have been fighting with the Muslims since Islam’s inception and since the fall of Constantinople in 1453 have become the new “buffer zone” between the former lands of Western Christendom and the dar Al-Islam. Every nation of Eastern Europe (including the Baltic nations) has been under Muslim control or domination at some point, going back to the Mongolian invasions of Eastern Europe in the 13th century. Unlike much of the West–specifically Germany and the Nordic nations, France and the Benelux nations, and the UK–the nations of Eastern Europe all have established Muslim communities whose existence pre-dates the Protestant Revolution and who have fought extensive wars with Muslim nations for their freedom. The exceptions to this are the southern European nations, such as Spain, Portugal, Italy, and Greece, who, while they have wandered far from the faith of their ancestors, were historically at war with the Islamic world. Hungary herself has a particular history, since not only was it the literal border between Islam and Christendom, but also, several times, the nation was wholly under Ottoman control and nearly wiped out through forced Islamization.

Eastern European people and especially Hungarians know Islam and its nature well. They were a Muslim territory too many times, and one thing about Eastern European people is that, while they are good people, unlike the West, they have long memories. Thankfully, even in spite of communism and the many other evils that befell Eastern Europe, the people remember their roots and are embracing them instead of, like Western Europe, throwing their culture, history, and progeny (for those who actually have children) into the trash.