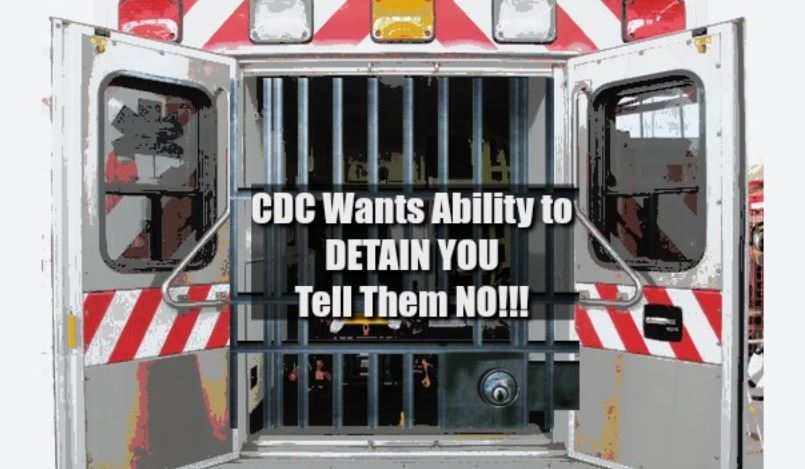 After 30 years as an independent reporter, I understand the machinations of the CDC.

Two parallel ops are going to intersect, unless they are stopped. And if they aren’t stopped, there is going to be BIG trouble.

OP ONE: the CDC’s imminent implementation of its new rules for controlling communicable diseases. I’ve covered these rules extensively. Here I’ll sum them up:

Americans traveling between states can be stopped, detained, and even quarantined, if they seem to have indications of an illness that could impact public health.

If this sounds vague, it is. The CDC has even coined a new absurd category: “precommunicable” illness. It means that with few or no symptoms—but merely the probability of having contacted someone who had or could have had an illness—a traveler in America can be picked up and held against his will.

The CDC asserts it has police powers to do this.

During the quarantine period, the person has no right to refuse medical treatment—which can include (toxic) vaccinations. After release, the person will be tracked electronically, and this surveillance can extend to an ankle bracelet.

OP TWO: The CDC and its state allies are expanding the promotion of mandatory vaccines. The state of California now has such a law (SB277) for all public and private school children. There is a move to extend the mandate to adults.

So…suppose you are spotted and detained as a person who may have a precommunicable disease. One of the first questions you’ll be asked is: “Are you up to date on your vaccinations?”

If not, you’ll get them. Forcibly.

Now suppose the disease you’re suspected of having has a vaccine—which you never got. You’re bad. You’re delinquent. You’re essentially a criminal. “Sir, if you had been vaccinated against the disease, you wouldn’t have the disease now, and you wouldn’t be in a position to infect others with it.”

But why stop there? At some point up the road, the CDC will say:

“Those people who have not gotten the full schedule of vaccinations are AUTOMATICALLY PRECOMMUNICABLE.”

That’s how the two ops will intersect.

A person who isn’t fully vaccinated is by definition a threat to “the community,” and he can be arrested.

That’s all the CDC will need to know—you’re not fully vaccinated. Therefore, you’ll fit the definition of a “precommunicable” health threat, and you can be held and shot with the full complement of vaccines.

“You see, Mr. Jones, we’ve detained you because we see you haven’t had any vaccinations for a long time. This makes you a danger, because vaccines are the ONLY way to guarantee immunity from diseases. You’re very vulnerable. You will get sick and spread that sickness to others. You’re precommunicable. You’re a spreader. We’re going to cut that off at the pass. In the next two days, we’re going to give you the basic ten vaccinations..”

The CDC is ALREADY asserting that any unvaccinated human is a danger to those around him. All that remains is to put bigger legal and police teeth into the assertion.

The mask and the cover story is: “We only want to detain people who could be spreading a highly dangerous disease like Ebola. We only want to stop the spread of pandemics.” That’s a lie.

The real op is eventual forced vaccination of everyone, carried out under police powers.

Universal forced vaccination IS the epidemic.

And the single antidote is freedom.

The freedom to refuse medication or vaccination of any kind.

That freedom is inherent.

But it must be taken.