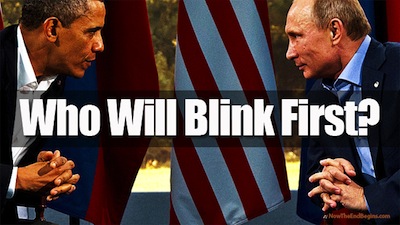 And all of a sudden it’s almost as if we’ve time traveled back to the Cold War.

It is trickling out today that Russian newspapers are warning a direct conflict with the United States is now possible over America’s obsessive regime change mission in Syria, which is being compared to the Cuban Missile Crisis in Russia.

In one article headlined ‘The stakes are higher than Syria’, the paper Moskovsky Komsomolets warns of a potential new war.

It states: “Just imagine that the US does what it has wanted to do for a long time and strike against Assad, not by mistake but on purpose and openly.

“Should Russia defend its ally or consider striking against the Americans but this would definitely lead to a Third World War.

“Russia can win big in Syria but it can also lose big too. We must not forget that in Syria we are playing an astonishingly risky game.”

It was added that this could mean “a full-scale war”.

Meanwhile as reported Tuesday, Russia is currently running a civil defense drill involving 40 million of its civilian residents which will run through October 7th. Obviously Putin knows something is up. On the American side, US diplomats have reportedly accused Russia of drugging them with date rape drugs!

The propaganda and war rhetoric is getting out of control.

Most Americans, like Congresswoman Tulsi, wish the CIA and Pentagon would just stop this horrible, unconstitutional rampage in Syria… before it is too late.