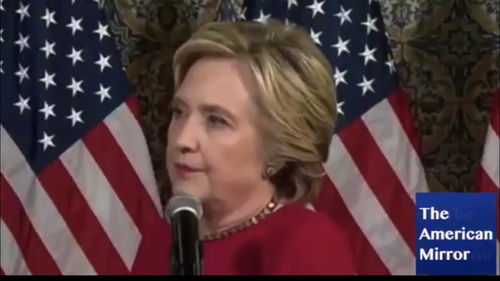 Head jerks back and forth while taking question from reporter

Hillary Clinton had another bizarre seizure-like moment while she was taking a question from a reporter, with video footage showing her head jerking back and forth in an unnatural motion.

While being asked about her running mate Tim Kaine’s debate preparation, Hillary’s head movements appear involuntary as she seems to have a slight spasm before recovering.

According to the American Mirror, the footage could be another indication that Hillary is suffering from early onset Parkinson’s, as many have speculated.

Questions over Hillary’s health exploded after our video posted on August went viral. The clip shows Hillary making odd head movements in response to a reporter asking her a question. Similar behavior was also observed at the DNC when Hillary reacted strangely to balloons being released.

The controversy picked up even more steam when Hillary felt ill during a 9/11 commemoration in New York and subsequently collapsed, prompting accusations that her campaign has been covering up the full extent of her illness.