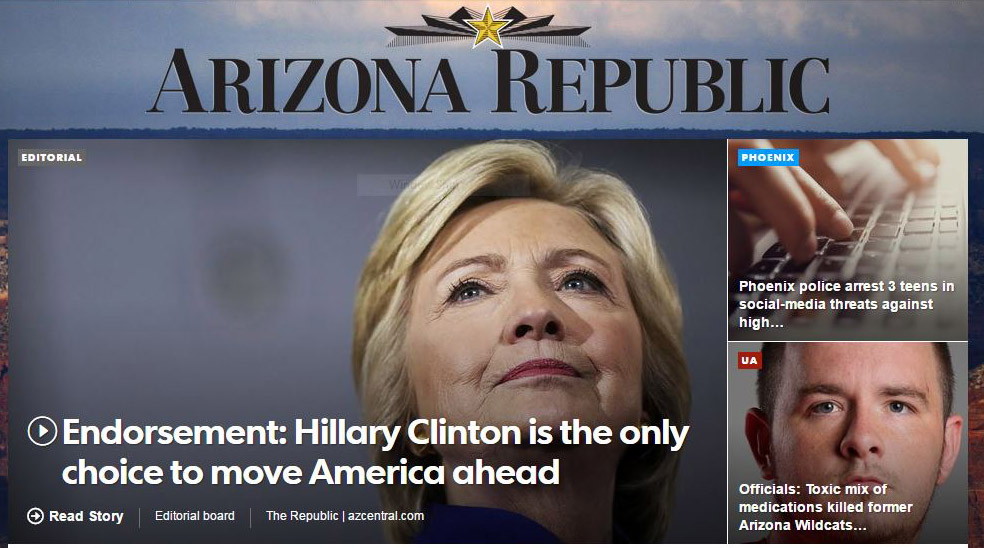 Led by the premier U.S. newspaper, the New York Times, newspapers all across America are coming out endorsing either Hillary Clinton for the presidency (17 endorsements), or the Libertarian Party candidate, Gary Johnson (3).

Not a single paper among the top 100 U.S. newspapers endorses Donald Trump.

Here are the 17 newspapers who endorse a sociopathic liar, lawless criminal who should be behind bars instead of running to be POTUS, and heartless woman who abandoned 4 Americans, including two members of her State Department staff, to die in Benghazi, Libya:

Notice that The Arizona Republic is among the 17 who are endorsing Hillary Clinton.

The newspaper is now, deservedly, getting blowback for its endorsement.

Republicans all over the country are cancelling their newspaper subscriptions […] against editorial boards endorsing Hillary Clinton for president.

It’s unlikely that the New York Times lost many subscribers when they endorsed the former secretary of state; it would have been unthinkable for them to do anything else. A blind alien living on the moon could have seen their endorsement coming. Some days, it feels like there’s a secret competition between the Times and the Washington Post to see who can bury Donald Trump the deepest. Anyone who would have canceled their subscription based on bias would have done so many months ago.

Newspapers like the Arizona Republic, however, have cultivated a conservative readership over the years. In the paper’s 100+ year history, the editors have never endorsed a Democrat for president. This year, they broke tradition, claiming that Donald Trump was unfit to take the country’s most important mantle.

“Trump’s long history of objectifying women and his demeaning comments about women during the campaign are not just good-old-boy gaffes,” the paper said in their endorsement of Clinton. “They are evidence of deep character flaws. They are part of a pattern.”

But The Arizona Republic is now feeling the consequences of their endorsement:

The subscription cancellations were coming every 10 minutes. Angry readers have been calling in droves. One caller issued a death threat.

Philip Boas, The Arizona Republic‘s editorial page editor, had a pompous pity party in a telephone interview on Oct. 5. He said about the canceled subscriptions, “We’re feeling the weight of our history.”

No, Boas, you POS, what you’re feeling is the weight of being on the wrong side of history.

There seems to be this assumption among many media-type conservatives that once Trump is finished, the movement he built will vanish along with him. As long as they can just get through this election, things will go back to normal. […] But more likely, a Trump loss in November will only crystallize the movement that made him the Republican nominee. And after four years of a Hillary Clinton presidency, that movement will be more powerful than ever. By the time it’s all said and done, Democrats and establishment Republicans may be wishing for the sweet nostalgia of Donald Trump. Millions of conservative Americans are just about tired of playing nice.