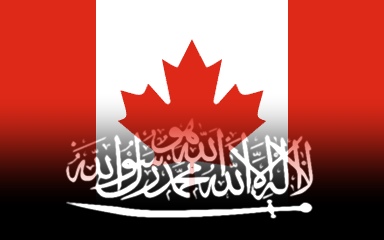 While Canada has gone more and more towards Socialism and allowing the silencing of those who disagree with homosexuality, it appears that there are many who have had enough when it comes to the Islamic invasion of their country, and are being quite vocal about it.

Several anti-Islam posters were placed at the University of Calgary on Tuesday, according to campus security.

Several of the posters included this:

“keep your barbaric ways … in your 7th century homeland.”

About 40 posters were discovered by students at 6:45 a.m. Tuesday, filled with hateful and obscene language telling Muslims to “keep your barbaric ways … in your 7th century homeland.”

While campus security acted quickly to take them down, other posters and similar hate literature were also found later in parking lots and in residential mailboxes just outside of campus in northwest communities.

“This is my campus, my community, but part of me feels very scared now,” said Lobna Al-Wadeih, a female Muslim student who wears a hijab.

“With my hijab, I feel like my being Muslim is kind of in your face. And out there, if I’m downtown or something, I will get that, I will get the ‘go home,’ from people.

Those responsible for the posters could face a number of criminal charges.

Under certain sections of the Criminal Code of Canada, inciting hate propaganda against any identifiable group can result in a maximum jail time of five years.

Tuesday’s posters mark the second time in two weeks that hateful literature was distributed on a university campus in Alberta.

On Sept. 19, 12 posters were found at the University of Alberta featuring a picture of a Sikh man, profanity about turbans and a statement calling on people from developing nations’ cultures to leave Canada.

So, no violence was issued, just an act of freedom of speech to call attention to a plague of the world, namely Islam. Yet, security is now going to be reviewed in an effort to make students “feel safe.” Why? Who has threatened anyone? Because you point out the evils of Islam that is somehow threatening? How is that inciting hate to speak the truth?

Of course, the stealth jihad organization known as the Muslim Students Association got in on what was going on.

“It’s easy to hate and to be misinformed, because it takes a lot of work to actually be informed,” said Moonis Ahmed, president of the Al-Madiyya Muslim Students Association. “We’re working hard at U of C to create a positive dialogue, and I would invite anyone, even people who feel such hatred, to reach out and ask us questions so we can have that dialogue with them.”

Sure they are because they want to bring the University into submission to Islam.

Apparently, University of Calgary President Elizabeth Cannon is upset, but not at the truth.

“It’s truly disturbing and makes me personally very angry,” said U of C president Elizabeth Cannon. “This is something we’ll have to evaluate. We have terrific campus security, our students do feel safe and we take pride in our programs, like safe walk, cameras and just looking out for each other. But we do want to analyze this and see if there is more that we can do.”

While I am not for someone inciting violence against anyone nor am I necessarily against strong language that calls attention to a problem (though i don’t think vulgarities are in order), there is no evidence of any violence resulting from the posters. So, why Ms. Cannon would be either disturbed or angry is beyond me. Perhaps she does not know the teachings of Muhammad.