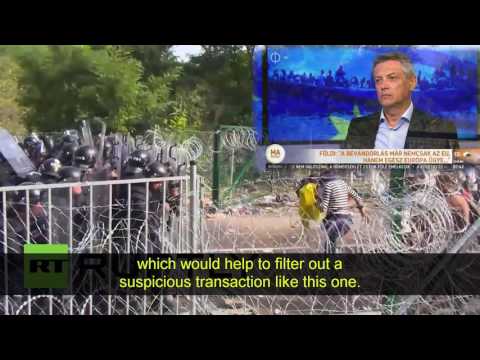 Laszlo Foidl is the former Director of Operations for the Hungarian Intelligence Services. In his most recent interview, he calls the Muslim invasion of the West a part of “fourth generation warfare,” using massive population movements to morally, culturally, and then finally topple physically governments who, as he says, will not submit to the will of European Union bureaucrats in Brussels:

As he alludes to and as we have pointed out many times, the real culprit behind this manufactured crisis is Germany, for there is no difference between it and the EU. They are also the reason why nothing is being done to stop these Muslims from coming, and it is not because they are incapable of it, but because they want it. Why destabilize all of Europe? The answer is best stated by none other than Saul Alinsky, who, like many others before him, noted, “never let a good crisis go to waste.”

Germany is not a stupid nation – it is very advanced and intelligent. They knew that millions of Muslims would be destructive to the whole nation. They knew and know that these people cannot and will never fit into German society. They also know, like any wise politician, the disposition of their people and how they will respond to certain situations.

What you are going to see play out over the next year (and it has already began to play out) is a massive backlash from the German people. Seeing the wanton destruction of their society and the brazen attitudes these Muslims have – thinking they are entitled to whatever they desire – they will be met with a silent but rising anger from the German people, who pride themselves of efficiency, industry, cleanliness, and order. The thoughts have already turned from welcoming and accepting towards genocide, and they increase with each day.

If I did not look like a “German”- Muslim or not- I would leave Germany immediately. Eventually, the German tax dollars are going to run out, and when this happens, anybody who does not appear to be a German will be immediately targeted, creating not only a massacre, but a call for Germany to return to her “old ways” that “always worked”; and far from being the end, it will be only the beginning of a much larger and painful conflict…