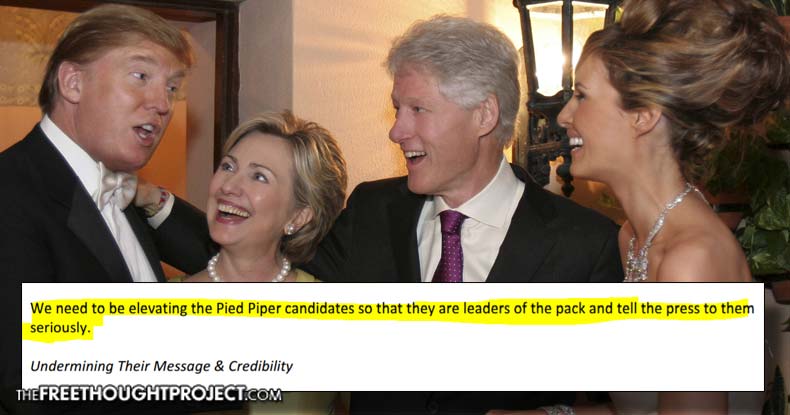 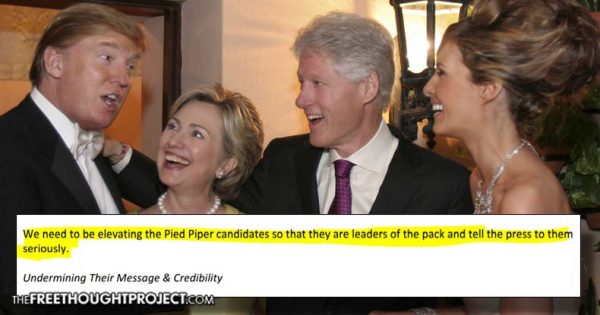 Wikileaks released a bombshell document on Saturday showing strategies to align the DNC and the Hillary Clinton campaign by promoting — not criticizing — the field of Republican opponents, particularly highlighting Donald Trump.

Clinton campaign wrote about their strategic goal of “elevating” Trump two months before he declared his candidacy https://t.co/bVVLQoGnhz pic.twitter.com/Wv9VUxufkQ

From the memo addressed to the DNC under the heading, “Our Goals & Strategy”:

“Our hope is that the goal of a potential HRC campaign and the DNC would be one-in-the-same: to make whomever the Republicans nominate unpalatable to the majority of the electorate. We have outlined three strategies to obtain our goal …”

Those strategies — while including the political typicality to paint the GOP candidates in an unfavorable light — also include the proposal to “Muddy the waters on any potential attack lodged against HRC.”

But far more telling is a section entitled: Operationalizing the Strategy.

Under the subheading, “Pied Piper Candidates,” the memo explains:

“There are two ways to approach the strategies mentioned above. The first is to use the field as a whole to inflict damage on itself similar to what happened to Mitt Romney in 2012. The variety of candidates is a positive here, and many of the lesser known can serve as a cudgel to move the more established candidates further to the right. In this scenario, we don’t want to marginalize the candidates, but make them more ‘Pied Piper’ candidates who actually represent the mainstream Republican Party. Pied Piper candidates include, but aren’t limited to:

“We need to be elevating the Pied Piper candidates so that they are leaders of the pack and tell the press to [take] them seriously.”

In other words, the April 7, 2015 memo — written at the very beginning of Clinton’s campaign — shows coordination with the Democratic National Committee from the start. Although written with the intimation whatever Clinton would choose to use against her Republican opponents would naturally benefit any Democrats in the presidential race, further information in the document shows either her campaign’s alignment had already begun, or that it would shortly.

Written under “Muddying the Waters,” the author explains the GOP has been “building its opposition research on Hillary Clinton for decades […] One way we can respond to these attacks is to show how they boomerang onto the Republican presidential field. The goal then is to have a dossier on the GOP candidates on the likely attacks HRC will face.”

What the memo’s author is describing overall constitutes a smear campaign through bait-and-switch — work to prop up the opposition by acknowledging its legitimacy while undermining the validity of the entire Republican Party by fixating on any fringe statements from those now-legitimate candidates.

In fact, the document also suggests even unproven information wouldn’t be outside the realm of possibility in the effort to vilify Republican opponents. After discussing the coming GOP attacks on Hillary Clinton’s credibility, the document states:

“In this regard, any information on scandals or ethical lapses on the GOP candidates would serve well. We won’t be picky.”

Wikileaks, after coming under fire at the beginning of the month for what many saw as a failure to deliver on its “October Surprise,” has certainly now made good on its promise with leaks of Clinton Campaign Chairman John Podesta’s emails.

Transcripts from Clinton’s paid speeches have surfaced proving — as her campaign proved — the candidate has a lack of understanding for the middle and working class, saying she is “far removed” because of the “fortunes” she and her husband “enjoy.”

Media collusion with the Clinton campaign has also now been cemented, with a Clinton Foundation insider describing with delight a forthcoming article for the New York Times,

Wikileaks release of the Podesta emails will most certainly reveal more in the days to come.