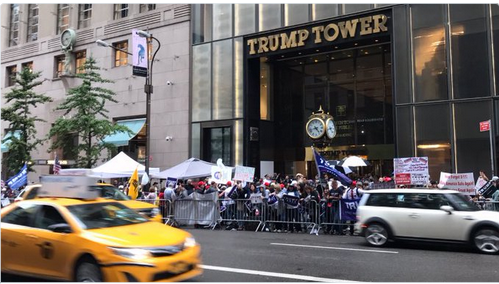 On September 10, 2016, her mask slipping, Hillary Clinton actually called millions of Americans, over whom she wants to rule as president, “a basket of deplorables” who are “irredeemable” racists, homophobes and jingoists because they deign to support her opponent, Donald Trump.

On October 7, 2016, an audio of Trump making lewd remarks of a married woman 11 years ago, was leaked to the media. Trump made those crude remarks in a supposedly private conversation with the weasel-faced Billy Bush, a correspondent for the trashy TV show, Access Hollywood. Coincidentally (or not), Billy Bush is the nephew of former president George H.W. Bush, who reportedly has said he will vote for Hillary Clinton.

The audio immediately was seized on by the MSM, who no longer even pretend to conceal their pro-Hillary stance. Never mind that their lord and savior, Barack Obama, had PUBLICLY talked about “eating p*ssy,” and their ball-busting mistress, Hillary Clinton, spews cruder and lewder obscenities to the faces of the Secret Service agents who risk their lives to protect her.

Being the eunuchs that they are, GOP elites almost soiled their pants. John McCain withdrew his endorsement of Trump, as the #NeverTrump RINOs bleat that, with only a month before the November 8 election, Trump must drop out of the presidential race.

Not being stupid, the Deplorables, aka the American people, see right through this faux scandal and the faux outrage of the MSM and RINOs. As an anonymous Facebook post says:

“We don’t care if the guy swears… or how many times he’s been married…or who he voted for, or what his income tax return shows. We want the problems fixed. Yes he’s an egomaniac, but we don’t care.[…]

We’re sick of politicians, sick of the Democratic and Republican Party. […] Americans are no longer going to be fooled, and the movement is out to change the direction we’re taking. […] This may be our only chance to have a non-politician, despite his flaws, try and correct the mess, at least for 4 years. We must take the shot, because the consequences of putting Hillary Clinton in office are frightening.”

See “Why Trump supporters don’t care that he made a lewd remark about a married woman 11 years ago“.

This weekend, (Saturday, Oct. 8), the Deplorables revolted and made their voices heard.

At his Fall Fest event in Elkhorn,Wisconsin, RINO House Speaker Paul Ryan kicked off his speech by making mention of the “elephant in the room,” and called Trump’s locker-room banter with Billy Bush “a troubling situation.”

The crowd of Deplorables responded by heckling Ryan with chants of “Trump!,” “God bless Trump,” and “See ya, Paul! Jackass!”. (Breitbart)

Also Saturday, while campaigning for Hillary in an early voting event in Milwaukee, Wisconsin, Bill Clinton was heckled by protesters shouting,

“Bill Clinton is a rapist!”

In the midst of criticizing Trump’s position on global warming, Clinton was notably jarred when he was interrupted by two individuals in the audience, one of whom carried a Bill Clinton Rape poster.

As Clinton began a sentence saying, “No one can dispute the fact…,” a person in the audience shouts, “That you’re a rapist!,” followed by another yelling, “Bill Clinton is a rapist!”

This was the second time in 3 days that Bill Clinton was heckled during a rally for Hillary. During a campaign event in Canton, Ohio, a woman interrupted the former president by shouting, “Bill Clinton is a rapist!”. The woman was holding a display also bearing those words. (InfoWars)

Meanwhile, a large and raucous crowd of Trump supporters rallied outside of Trump Tower in Midtown Manhattan on Saturday afternoon. The crowd was so big that people spilled from the sidewalk into the street, with only a metal security barrier keeping them from the Fifth Avenue traffic.

Even the NYPD shouted their support:

While in Bakersfield, California, at the Bakersfield Business Conference, thousands of people cheered for Trump to stay in the race.

“The response from the [conference] attendees, mostly conservative voters, shows a potentially large disconnect between ordinary Americans and elites on the issue of Trump’s character revelations. Many in the media and political leaders have said Trump should leave the ticket after disclosure of lewd talk on a bus 11 years ago. […] But so far, the voters don’t seem moved.”

According to a Politico/Morning Consult poll conducted yesterday, a remarkable number of people had heard about the leaked audio of Trump’s lewd remarks. There is also an equally remarkable polarization: