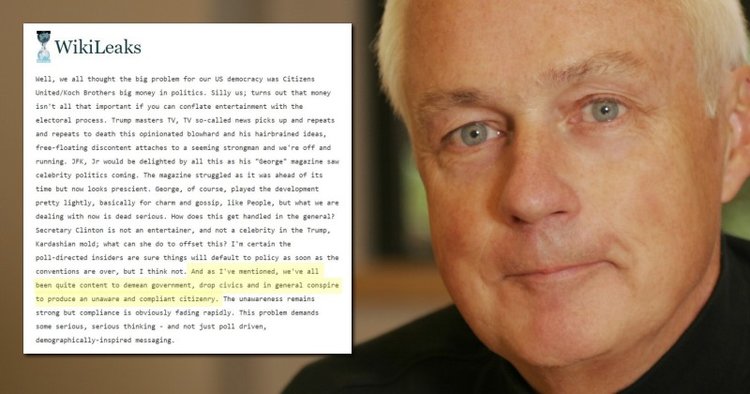 A Clinton campaign email released as part of the Wikileaks data dump yesterday talks about the need to maintain political power by producing “an unaware and compliant citizenry”.

Ivey was appointed Chairman of the National Endowment for the Arts during Bill Clinton’s second term. According to his bio, Ivey “is a trustee of the Center for American Progress (a Clinton campaign front), and was a Team Leader in the Barack Obama presidential transition.”

In the email, Ivey outlines the panic amongst some Democrats that Donald Trump’s “celebrity politics” persona cannot be matched by Hillary, who is “not an entertainer, and not a celebrity in the Trump, Kardashian mold.”

“Money isn’t all that important if you can conflate entertainment with the electoral process. Trump masters TV, TV so-called news picks up and repeats and repeats to death this opinionated blowhard and his hairbrained ideas, free-floating discontent attaches to a seeming strongman and we’re off and running,” complains Ivey.

“And as I’ve mentioned, we’ve all been quite content to demean government, drop civics and in general conspire to produce an unaware and compliant citizenry,” he writes.

To emphasize, Ivey admits that the left has ‘conspired’ to “produce an unaware and compliant citizenry” but that they’re not as easy to manipulate anymore and that this is a problem. He characterizes “unawareness” amongst the public as a positive thing for the Clinton campaign.

Ivey ends the email by saying he will attend a Clinton fundraiser and that he fears, “we are all now trying to navigate a set of forces that cannot be simply explained or fully understood.”

The email is a shocking insight into the elitist and arrogant mindset that pervades the Clinton campaign, with Americans viewed as dumb sheep who need to be herded in the right direction.