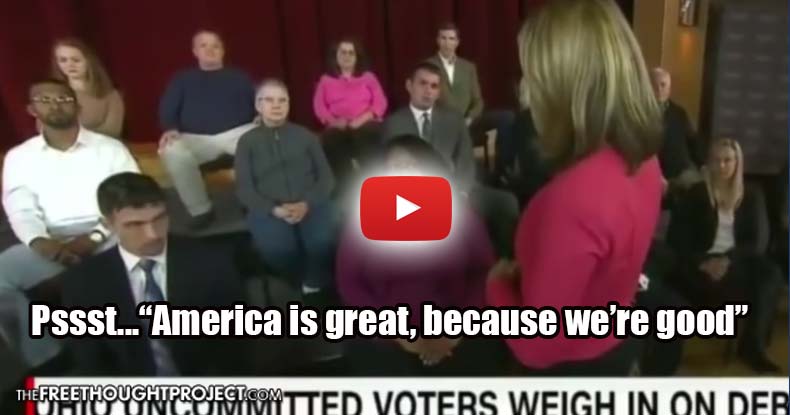 Make no mistake about it, Hillary Clinton and her elite backers control the mainstream media narrative. However, the illusion of an unbiased press is quickly falling apart as multiple leaked emails, and now, a video from Sunday night’s debate on CNN shows.

During a brief clip, which has now been posted to YouTube, CNN forgot to kill reporter Pamela Brown’s mic when they cut away. As the camera cuts back to the allegedly ‘unbiased’ debate focus group, Brown can be heard speaking to the group under her breath.

“America is great, because we’re good,” Brown whispers to the group in an obvious attempt to coach their answers.

Once Brown realizes she is back on air, she quickly asks a participant in the focus group what anti-Trump argument from Clinton impressed her most. Having just been told what to say by Brown, the participant quickly regurgitated her canned response, adding her own adaptation for good measure.

“She stated that America is already great, and I tend to agree with that,” the panel member says. “Though we are slow in progressing in a number of ways, we are progressing and we need to continue the momentum.”

As the Daily Caller notes, “this brief exchange is being interpreted by many as proof CNN was coaching focus group members about what to say on the air. Within just a few hours of being uploaded, the video collected nearly 150,000 views. There are other possible explanations, though; Brown may have been informing focus group members about what clip CNN had just aired (since they couldn’t see the replay themselves), or Brown could have been setting up a semi-staged response after previously finding out what the focus group member wanted to say.”

Due to the recent revelations by WikiLeaks highlighting Clinton’s control and outright dictations of the mainstream media narrative, the Free Thought Project is leaning toward the idea that this focus group was actually being coached.

As we recently reported, “The Podesta Emails” reveal not only direct evidence of media coordination, but an attempt to alleviate the damage expected to be wrought by the impending 2015 release of a book by Peter Schweizer titled: “Clinton Cash: The Untold Story of How and Why Foreign Governments and Businesses Helped Make Bill and Hillary Rich.”

As Clinton has proven, the establishment only needs to label its critics as ‘conspiracy theorists’ to force the rest of society not to take them seriously. Unfortunately, for Americans, this schoolyard tactic of name calling and ridicule works — as no one wants to be cast out of the herd.

However, as our readers know, questioning everything is the only way to build a free and peaceful world.

Please share this story and video so that others may see for themselves what ‘democracy’ looks like in an Orwellian society.”

UPDATE: A spokesperson from CNN contacted us with the following statement:

“The focus group was not able to hear or see the post-debate segment. Brown described the segment in real time so they would know what was being discussed. It’s absurd to think she was coaching the focus group in any way.”