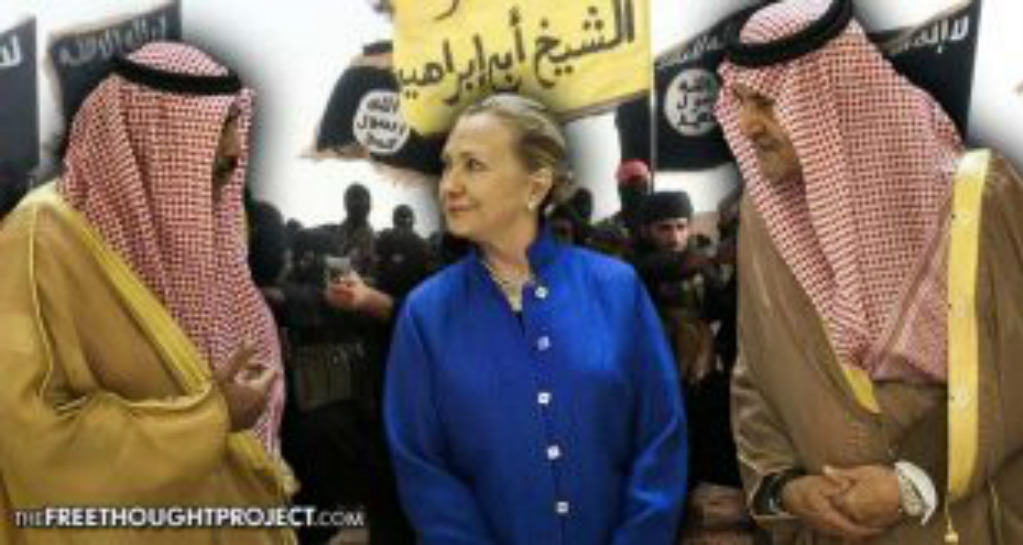 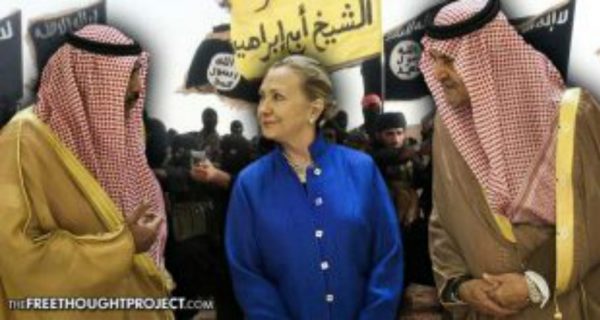 Hillary Clinton has known since at least 2014 the governments of Saudi Arabia and Qatar provide “clandestine financial and logistic support” to the Islamic State and other radical Islamic groups — but, rather than call for a halt of arms sales and support, Clinton only heralded the need to “bring pressure” on the Saudi government.

Wikileaks has now disclosed an August 17, 2014 email from Clinton to her campaign chair John Podesta, then serving as counselor to President Obama, an eight-point plan to combat the growing threat of the Islamic State (ISIS, ISIL, Daesh) in Iraq and Syria, noting under the first point, with all emphasis added:

“With all of its tragic aspects, the advance of ISIL through Iraq gives the U.S. Government an opportunity to change the way it deals with the chaotic security situation in North Africa and the Middle East. The most important factor in this matter is to make use of intelligence resources and Special Operations troops in an aggressive manner, while avoiding the old school solution, which calls for more traditional military operations.”

Clinton cites the need for the United States to work in concert with Peshmerga fighters of the Kurdish Regional Government, as the “commanders are aggressive hard fighting troops, who have long standing relationships with CIA officers and Special Forces operators.”

“At the same time we should return to plans to provide the FSA, or some group of moderate forces, with equipment that will allow them to deal with a weakened ISIL, and stepped up operations against the Syrian regime […]

“While this military/para-military operation is moving forward, we need to use our diplomatic and more traditional intelligence assets to bring pressure on the governments of Qatar and Saudi Arabia, which are providing clandestine financial and logistic support to ISIL and other radical Sunni groups in the region.”

Through this coordination, Clinton adds, “The Qataris and Saudis will be put in a position of balancing policy between their ongoing competition to dominate the Sunni world and the consequences of serious U.S. pressure.”

Nowhere in the email — sent, of course, through the notorious unsecured server — does Clinton address the near blinding hypocrisy of the U.S. continuing to provide Saudi Arabia with multiple billions in weapons, arms, aircraft, and other support in full knowledge of its active support for terrorists.

Terrorists and terrorism being the putative target of neverending U.S. war.

In fact, in a 2011 Christmas Eve email string revealed in the Intercept in February this year, Jake Sullivan, then Clinton’s deputy chief of staff and now a campaign senior foreign policy adviser, celebrated the sale to Saudi Arabia more than 80 Boeing F-15SA fighter jets — “along with upgrades to the pre-existing Saudi fleet of 70 F-15 aircraft and munitions, spare parts, training, maintenance, and logistics” — with the heading addressed to Clinton, “FYI — good news.”

Clinton’s comment about the Saudis and Qataris funding and assisting the Islamic State appears not to be a striking revelation — the tone seems merely offhand — as if the practice had been ongoing and common knowledge among top-level officials.

In that context, just five months prior to the email, the White House issued a press statement fact sheet on March 28, 2014, championing the U.S.’ “strong relationship with Saudi Arabia, which has endured for over 80 years,” and noting the Kingdom “is the largest U.S. Foreign Military Sales (FMS) customer, with active and open cases valued at approximately $97 billion.”

Further, the statement continues under the not-at-all ironic heading “Counterterrorism”:

“Saudi Arabia has been a strong U.S. counterterrorism partner, particularly on disrupting Al Qaeda elements. We work closely with Saudi authorities on a range of CT issues, including countering terrorist financing, and the United States and Saudi Arabia work together to help various nations in the region counter shared terrorist threats.”

Of course, even if the speculation about Saudi financial support being known fact prior to the newly revealed email is incorrect, certainly any further arms sales after that point would have been made in full awareness of that crucial fact.

Yet, in November 2015, the Pentagon’s Defense Security Cooperation Agency and U.S. State Department approved “the sale of $1.29 billion in smart bombs to Saudi Arabia to help replenish supplies used in its battle against insurgents in Yemen and air strikes against Islamic State in Syria,” Reuters reported.

Unsurprisingly, neither the Pentagon nor the Department of State made clear how providing well over a billion dollars in controversial munitions to a known funder and supporter of the Islamic State would assist in the effort to fight the Islamic State.

However, it would additionally be worth pointing out that even before the ‘official’ formation of the ISIL, Saudi Arabia and Qatar had long-established records of egregious human rights abuses of apparent little consequence to the U.S. government and Hillary Clinton.

As an investigation by International Business Times revealed in 2015,

“As secretary of state, Hillary Clinton also accused some of these countries of failing to marshal a serious and sustained campaign to confront terrorism. In a December 2009 State Department cable published by Wikileaks, Clinton complained of ‘an ongoing challenge to persuade Saudi officials to treat terrorist financing emanating from Saudi Arabia as a strategic priority.’ She declared that ‘Qatar’s overall level of CT [counterterrorism] cooperation with the U.S. is considered the worst in the region.’”

And “these countries donated to the Clinton Foundation and received increased weapons export authorizations from the Clinton-run State Department.”

IBTimes continued, “In the years before Hillary Clinton became secretary of state, the Kingdom of Saudi Arabia contributed at least $10 million to the Clinton Foundation.”

“Under Clinton’s leadership,” IBTimes found, “the State Department approved $165 billion worth of commercial arms sales to 20 nations whose governments have given money to the Clinton Foundation.”

As noted by the Daily Caller yesterday, “Qatar has given between $1 million and $5 million to the Clinton Foundation and Saudi Arabia has donated upwards of $25 million dollars to the Foundation.”

Just yesterday, in fact, an exclusive report by Reuters disclosed concern by unnamed State Department officials that the 2015 nearly $1.3 billion bomb sale could cause the United States to be “implicated in war crimes” for the U.S.-backed, Saudi-led coalition’s indiscriminate destruction of infrastructure and horrific pattern of killing civilians in Yemen.

All of the aforementioned points — taken in the context of Wikileaks’ newly released email from the so-called horse’s mouth the Kingdom actively funds and supports the Islamic State — should, ideally, decimate any arguments for continued support of Saudi Arabia by the United States, if not the legitimacy of Hillary Clinton’s bid for the White House.