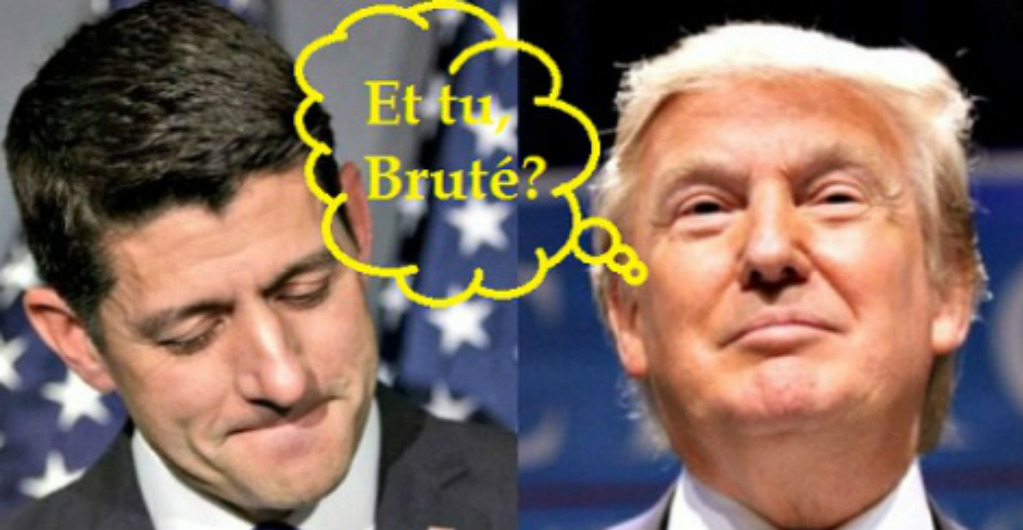 Last Friday, Oct. 7, 2016, someone leaked a tape to the Washington Post of a supposedly private conversation from 11 years ago between Donald Trump and Access Hollywood‘s anchor, Billy Bush, a nephew of former president George H.W. Bush.

Well, it turns out that the audio had been edited to give the impression that Trump was being adulterous in his attempt to seduce the woman. Edited out of the audio was Trump saying that the incident with the married woman had taken place when he was a single man.

Even worse than the artful and malicious editing is the source of the leak.

Liberty University president Jerry Falwell, Jr. was the first to suggest that GOP elites may have leaked the tape to Washington Post. Jim Hoft of Gateway Pundit confirmed that GOP elites indeed had leaked the damaging “pussy audio”:

“I spoke with a reporter tonight who believes the reports are true. It was GOP elites who released the audio to the Washington Post.”

“an American columnist, writer, and political adviser. He was chief spokesman for the Coalition Provisional Authority in Iraq and senior foreign policy adviser to U.S. presidential candidate Mitt Romney during the 2012 election campaign. A frequent commentator on Fox News and contributor to The Wall Street Journal, he is co-author of the book Start-up Nation: The Story of Israel’s Economic Miracle (2009).”

“a textbook example of how to succeed by serving the Illuminati bankers’ Zionist Division which includes Israel, the US and Western Europe. […] Caught the eye of Neo Con boss William Kristol who famously said the Iraq war was conceived by 25 Jewish intellectuals in Washington.

Worked for the Carlyle Group , the tenth biggest defense contractor in the world, which specializes in starting the wars that may require its products. It hires retired politicians like GHW Bush who are able to get funding for weapons even if the Pentagon doesn’t want them.”

Guess to whom Senor is married?

Wiki identifies the “religion” of both Dan Senor and Campbell Brown as “Judaism”.

The GOP’s sabotage of Trump’s campaign isn’t confined to leaking the “p*ssy tape”. According to Mike Cernovich:

Donald Trump’s get out the vote efforts have been sabotaged at every level by the GOP, sources report exclusively to this reporter. Some of the sabotage is obvious and clear, and others is more subtle. Their motivations for sabotage vary from personal and professional jealousy to financial.

Journalist Mike Tracey said that the GOP headquarters in Lancaster County, Pennsylvania was closed on a Sunday – a huge day for voter registration efforts. A concerned GOP operative warned that “Trump will not win PA unless drastic change is made.”

In Florida, voter registration data show that Democrats are walloping Republicans. The Florida Democratic Party has submitted about 488,000 voter-registration forms it has collected for this election, while Republicans have submitted only about 60,000.

According to Cernovich, the GOP was sabotaging Trump’s efforts even well before the leak of the infamous “p*ssy tape”:

The GOP’s plan was to lose Pennsylvania, Florida, and Ohio. Then the “hit mic” video gave them an excuse to make their sabotage public. The “hot mic” video had no effect on voter sentiment, but it did give the saboteurs an excuse to publicly renounce Trump. Local offices were shut down, and Senators and Congressmen and other Republicans were told that endorsing Trump would lead to funding being cut off.

The GOP is committing suicide.

Already, according to Trump spokeswoman Katrina Pierson, her phone is inundated with text messages from all over the country of people voting for Trump but not necessarily voting for other Republicans who are up for election/reelection.

By sabotaging Trump, Paul Ryan, a Catholic who claims to be pro-life, and other GOP elites not only are ensuring that Hillary Clinton — who is not just pro-abortion, but favors late-term abortion — is elected to the White House, they are signing the death sentence of their party.

“Paul Ryan should spend more time on balancing the budget, jobs and illegal immigration and not waste his time on fighting Republican nominee” –10:22 AM – 10 Oct 2016

“Our very weak and ineffective leader, Paul Ryan, had a bad conference call where his members went wild at his disloyalty.” –6:05 AM – 11 Oct 2016

The GOP is sending out a mass email to poll Republicans on whether they’ll vote for Trump and for other Republican candidates next month.

Go here to take the poll and let the GOP know what you think of them.