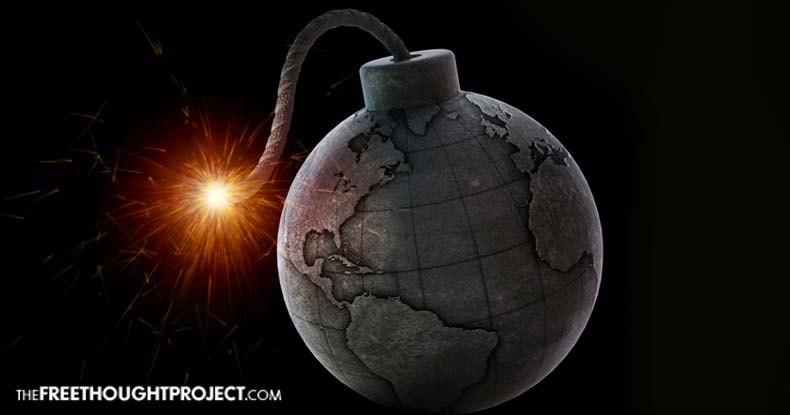 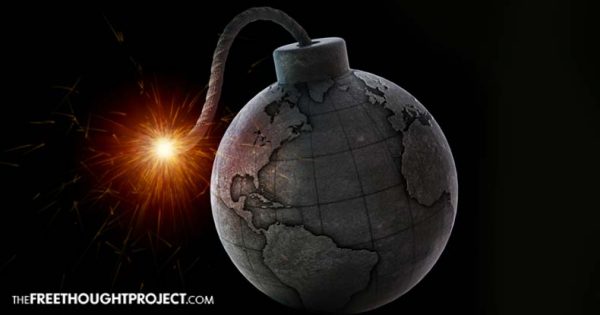 Months of disquieting and needless escalation between the United States and Russia over Syria and the Asia-Pacific theater quickened feverishly to near outright hostility over the past 48 hours, and — considering semantics from both ends suggestive of antebellum blame-casting — it’s past time to pay attention.

Indeed, though a few analysts still dismissively liken the tensions to so much blustery rhetoric, a growing number contend obstinate U.S. posturing about Russian aggression hasn’t been taken so lightly by President Vladimir Putin and his rapidly amassing allies.

Additionally, it now seems the U.S. has backed its incessant finger-pointing with the subtle language necessary to undertake what could best, if ironically, be termed a ‘defensive first strike.’

While full-scale nuclear war might indeed be an outside possibility at this early date, the specter of full military engagement is quickly materializing on several fronts. To understand how we arrived so near this precipice, a series of events and statements over the previous month should be considered contextually with those of the last two days.

After officially accusing the Russian government on Friday of attempting to influence the presidential election by hacking into and leaking documents from the Democratic National Committee servers — which, despite fast efforts to save face, undoubtedly tarnished the reputations of party members and nominee Hillary Clinton — President Obama offered an alarming statement Tuesday giving that accusation sharp teeth.

“There are a range of responses that are available to the president and he will consider a response that is proportional,” White House spokesman Josh Earnest, quoted by Reuters, told media aboard Air Force One. “It is certainly possible that the president can choose response options that we never announce.”

Speculation on an unnamed option largely centered around some form of cyber response, given the original accusation of hacking — however, it must be noted, two years ago the Obama administration deemed hacking an act of cyberterrorism and an utmost security priority — ‘terrorism’ being of critical relevance given the ongoing war against it.

Notably, U.S. officials have previously asserted cyber attacks, in some cases, could elicit a military response.

Without unassailable proof the Russian government hacked the DNC, any putative ‘response’ by the U.S. — proportional or not, cyber-oriented or not — would inherently be an aggressive first strike. Given the dispute over definitive evidence tracing the hack to Russia, any follow-through could conceivably be considered an act of war and/or terrorism.

As such, an actual response of any nature has been posited unlikely — however, in consideration of last week’s belligerent remarks by U.S. Army Chief of Staff Gen. Mark Milley, downplaying the potential for a response could be foolhardy.

“The strategic resolve of our nation, the United States, is being challenged and our alliances tested in ways that we haven’t faced in many, many decades,” Milley told attendees of an annual meeting of the Association of the United States Army.

“I want to be clear to those who wish to do us harm … the United States military — despite all of our challenges, despite our [operational] tempo, despite everything we have been doing — we will stop you and we will beat you harder than you have ever been beaten before. Make no mistake about that.”

Milley went on to note Russia, China, North Korea, and Iran have “revised their own doctrines” and “are rapidly modernizing their military today to avoid our strengths in hopes of defeating us at some point in the future.”

Whether or not Russian military would wind up fighting in Europe could be an entirely moot issue, as NATO has been amassing thousands of troops in Eastern Europe under the premise of protecting nervous nations from possible invasion. That assemblage of troops has been cited by Russia as posing an aggressive nuclear threat — which officials from the U.S. and its allies have laughed off as absurd.

“Across the Atlantic, we’re refreshing NATO’s nuclear playbook — to better integrate conventional and nuclear deterrence, to ensure we plan and train like we’d fight, and to deter Russia from thinking it can benefit from nuclear use in a conflict with NATO,” U.S. Defense Secretary Ash Carter stated September 29.

Russian Foreign Ministry officials responded by reiterating the perception of American aggression, as quoted by the Washington Post, “Carter’s statement means that if Russia comes under attack from U.S. allies, the Americans will be ready to back it and threaten to use their nuclear weapons against us. We would like to think that Washington understands the meaning of such statements and their possible consequences for international security and stability.”

On Tuesday, a startlingly broad ‘recommendation’ published in Znak, Russian state officials and government workers were advised to immediately pull family members from study abroad programs — or any other endeavors — in Europe to return to the motherland. Translated by Zero Hedge and cited by Znak, political analyst Stanislav Belkovsky — albeit noting the controversy of the recommendation — said, in part, “this is all part of a package of measures to prepare the elites for some ‘big war’ even if it is rather conditional …”

Also on Tuesday, Putin abruptly canceled a planned trip to Paris over the unraveling situation in Syria.

“I would like to caution Washington’s colleagues to carefully consider the possible consequences of such plans,” said Russian Major General Igor Konashenkov in a statement, adding, “I remind U.S. strategists that air cover for the Russian military bases in Tartus and Hmeymim includes S-400 and S-300 anti-aircraft missile systems, the range of which may come as a surprise to any unidentified flying objects.”

Observers rightly focused on the latter portion of the previous statement as a warning to the United States that Russia would not hesitate to strike first, ask no questions later — since it would be justified in defending ally Syrian President Bashar al-Assad’s troops in a sovereign nation by request.

However, the second warning — after the U.S. bombing of Assad’s troops in mid-September flared contention — constitutes, in actuality, the greater portent.

Konashenkov, as Underground Reporter noted, “made clear Russia has a number of servicemen and aid workers in several communities in Aleppo, and that ‘any strikes on territories controlled by the Syrian government will create a clear threat’ to Russian citizens.”

Dropping all pretenses, he added, “I am warning anyone, that after the U.S.-led coalition jets bombed positions of the Syrian government forces on September 17 in Deir ez-Zor, we will take all necessary measures to prevent other American ‘mistakes’ against the Russian military or other military facilities in the territory of the Syrian Arab Republic.”

China, which had originally intimated support for Russia over the U.S. quest to oust Assad, has fomented its alliance in recent days. According to one analyst, there “is no question that there is correlation, coherence and coordination between Russia and China on the Syrian issue.”

Russia has similarly indicated it would back China over the intricate territorial dispute in the South and East China Seas, particularly in defense against meddling by the United States and its ally South Korea — who will shortly deploy the U.S.’ Terminal High Altitude Area Defense (THAAD) amid contention from both rival nations, as well as its citizenry.

Although THAAD ostensibly could only be deployed in a defensive capacity, China and Russia criticize its proximity to the Chinese border as an act of direct aggression. On Tuesday the two nations announced plans to hold their second joint anti-missiles drill in 2017. According to a nationalist outlet cited by Reuters, Chinese Major Gen. Cai Jun stated,

One article could not do justice to the multi-fronted, labyrinthine conflict as it now stands, but with the current situation described by some as more dangerous than even the Cuban Missile Crisis — which nearly drew the U.S. into the first nuclear war — it would perhaps be advisable to focus on swiftly-unfolding international news rather than exhaustively debating lesser-evilism.

“I think the world has reached a dangerous point.”