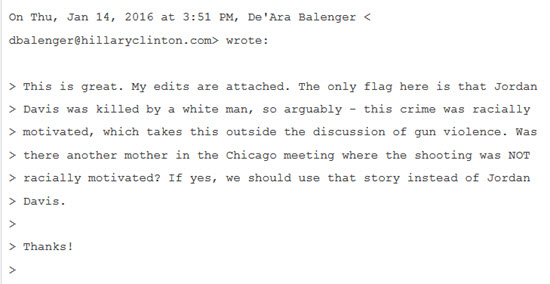 In a sane world not run by psychopaths, Wikileaks would be destroying Hillary Clinton’s campaign right now. There would be no way Hillary could even look herself in a mirror, let alone continue to run to be the president of people the leaks show she hates. In fact, by continuing to run, Hillary has proven how utterly disconnected from the rest of the country she truly is, and how much she does not care at all about how much the majority of the country truly loathes the thought of her being president.

She obviously just wants the power.

As the mainstream media continues to play deaf and dumb, new revelations buried in thousands of Hillary campaign manager John Podesta’s leaked emails are spewing out by the day. It just continues to get worse and worse and now, even more disgusting.

Hillary has openly called for more gun control on the campaign trail and she even vowed to sign gun control executive orders as president. This leaked email chain involves a back-and-forth to thoughtfully handpick which shootings Hillary should exploit and propagandize in order to further her anti-Second Amendment gun control agenda.

In an email exchange dated January 14, 2016, Clinton campaign staffers are trying to figure out which shootings to highlight in a gun control essay intended to appeal to mothers. The essay, written by Marie Claire, was in draft form at the time emails were being exchanged, and Clinton had been asked to contribute to it. As a result, staffers were trying to decide whether to include Davis’ shooting death or discard it.

This is great. My edits are attached. The only flag here is that Jordan Davis was killed by a white man, so arguably – this crime was racially motivated, which takes this outside the discussion of gun violence. Was there another mother in the Chicago meeting where the shooting was NOT racially motivated? If yes, we should use that story instead of Jordan Davis.

Staffer Corey Ciorciari replied, “You know where I stand on this. It can be racially motivated and gun violence should still very much be part of the discussion. Even more so here given that Jordan’s mom is one of the leading gun violence prevention proponents in the country.”

Ultimately, Hillary did not discuss Jordan Davis in her final essay. Guess the details weren’t convenient enough for her agenda.

How disgusting and dehumanizing the way they talk about real people whose lives have been destroyed like toys. “Can you find another mother — WHOSE SON OR DAUGHTER HAS BEEN MURDERED — whose narrative we can twist and use to try to take away America’s right to keep and bear arms and protect themselves from also being murdered?”

Sickening. These people truly are vultures.