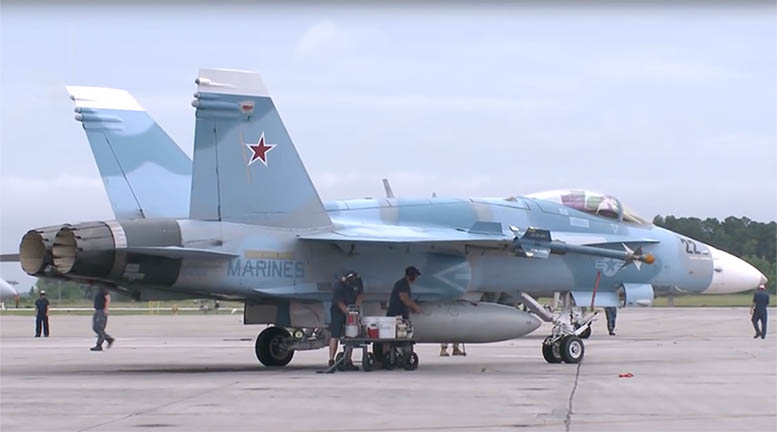 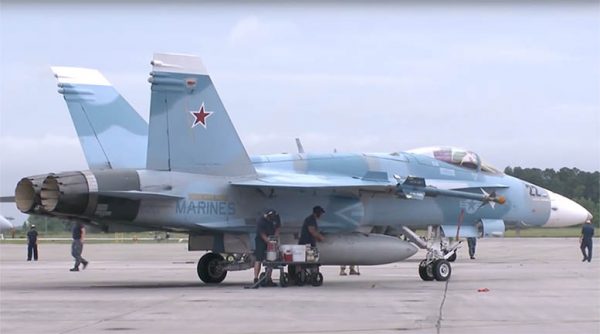 Last week, a Canadian journalist published pictures of the US Air Force repainting their F/A-18 jets to match the paint scheme of Russian jets currently deployed in Syria. Though the journalist, Christian Borys, suggested that the unusual paint job was due to standard military “aggressor squadrons” war-games meant to simulate engaging “the enemy,” some have speculated it could be proof of an imminent false flag meant to justify US “boots on the ground” in Syria. Regardless of whether it is standard procedure or indicative of an impending false flag, either threatens to worsen what is already an increasingly desperate geopolitical situation that could easily develop into full-scale, global war.

Aggressor squadrons have indeed been a part of US military war-games since the late 1960s. Planes that are painted to appear as the “aggressor” employ enemy tactics, techniques, and procedures in order to offer US soldiers a realistic simulation of air combat. During much of the Cold War, many of these “aggressor” planes were also painted in Russian colors to simulate combat encounters anticipated with the Soviet Union. However, it is not only the rhetoric of military officials that suggests that there are preparations under way for an imminent war between the US and Russia. Just four days ago, the Air Force practiced dropping “dummy nukes” from aircraft. Though no live warheads were used, the B61 nuclear bombs tested are considered “critical elements” of the US nuclear arsenal. Russia itself seems to think the threat of a major nuclear war is imminent as they recently held a massive, nationwide drill involving 40 million Russians to prepare for a nuclear disaster. The Russian government has also ordered the family members of all Russian government officials to return to Russia effective immediately.Though the Cold War thankfully failed to develop into a full-scale military confrontation, the US Air Force’s decision to use aggressor squadrons mimicking Russian jets once again is indicative that the US government undeniably views Russia as its enemy. Indeed, less than a year ago, the US Army Chief of Staff, Gen. Mark Milley, called Russia “aggressive” and “adversarial to the interests of the United States,” making the nation the US’ #1 threat in the world. Milley’s rhetoric, as well as that of other US military officials and politicians, has only become more hawkish over the past few months. Last week, Milley spoke to those “who oppose the United States,” warning them they they would be stopped and beaten “harder than [they] have ever been beaten before.” Moments later, he directly named Russia as an enemy of the state.

A comparison of US jets (L) and Russian jets (R) currently involved in military operations in Syria. Compare these images to the pictures at the beginning of the article.

Yet, these obvious preparations for war have also raised understandable concerns that the newly painted jets could be used in a US-backed false flag operation. Indeed, many major wars involving the US were provoked by now-declassified false flags, such as the Spanish-American War (sinking of the USS Maine), US involvement in World War I (sinking of the Lusitania) and the Vietnam War (Gulf of Tonkin). Other suspected false flags, such as September 11th, have been blamed for justifying the now 15-year-old War on Terror. False flags have been so frequently employed by the US government for a variety of reasons that a former CIA agent admitted in an interview that “every single terror attack in the US was a false flag.” Given that the US has carried out false flags in the past for various purposes, what would they stand to gain from a false flag now, particularly one involving “Russian” jets?

Actually, the Obama administration stands to gain a lot from any potential false flag, especially one that could pin civilian deaths on the Russians in Syria. In the past weeks, the US and its allies have been relentlessly accusing Russia of bombing civilians in Aleppo as well as UN aid convoy. However, these claims have been based on speculation and wishful thinking. The State Department, in an extremely awkward press conference, failed to name a single example of civilian infrastructure Russia had bombed in Aleppo, and mounting evidence suggests the US-led coalition was actually to blame for the destruction of the UN aid convoy.

A false flag in which jets disguised as Russian aircraft savagely bomb Syrian civilians would be just what the Obama administration has been waiting for ever since the conflict began in 2011. Such a bombing, regardless of whether or not it is staged, would allow the US to justify military action against both Russia and the Syrian government and pursue its long-admitted goal of regime change in Syria. Whether the painted jets will be used for such a nefarious purpose is hard to say as both possibilities seem equally likely considering the dangerous and high-stake situation at hand. Yet, regardless of the real motivation behind the paint job, both possibilities sadly seem to lead toward the same, terrifying conclusion: war is on the horizon.