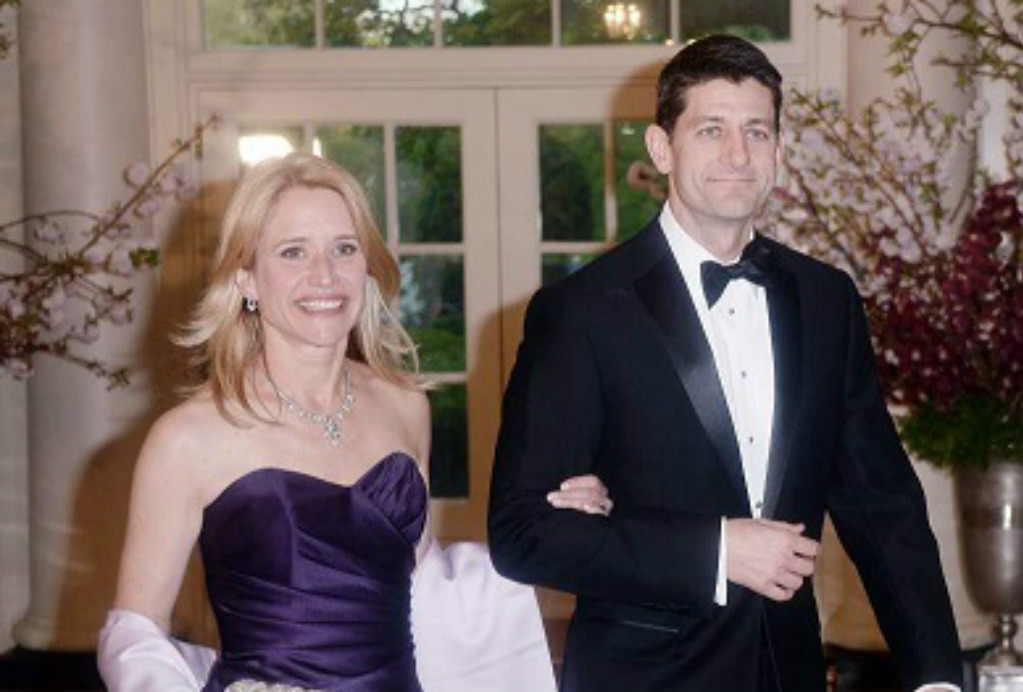 Geoff Ross writes for Dr. Rich Swier, May 18, 2016, that marriage is “a team effort” and that of House Speaker Paul Ryan is no different:

“A solid marriage will have the man supporting the wife’s decision’s and vice versa.

So if you are scratching your head and rubbing your rabbit foot in an expression of confusion and lack of understanding of Speaker of the House Paul Ryan and his blatant liberal agenda and decision making processes all you have to do is look into his family unit. Then you will learn that he supporting [sic] his wife’s ideology. As a man should and probably to remain in good graces in a supportive marriage.

Janna herself has lobbied for liberal movements, such as marching in Washington in college for women’s rights, The New York Times reported. Janna rarely gives interviews, CNN reported, and doesn’t speak publicly about her political views.”

From a New York Times report of August 23, 2012, after Paul Ryan was selected by Mitt Romney to be his VP running-mate:

Friends say Mrs. Ryan chose her political life’s path with a sense of purpose, and they describe her as being a “practical conservative” these days, even if she might once have been more of a Democrat. […]

She is not, however, someone who has shied away from asserting herself. Mrs. Ryan is a lawyer and a tax specialist who, before her marriage, worked for prestigious government affairs and accounting firms as a lobbyist, representing some of the biggest names in a range of industries, including Blue Cross/Blue Shield, Novartis and Pharmaceutical Research and Manufacturers of America. […]

Mrs. Ryan’s professors [at Wellesley] described her as being interested in social justice and the broader world around her. […]

According to the New York Times, in 2011 the Ryans had assets valued at between $2 million and $7.8 million, “much of which is in Mrs. Ryan’s trust.”

Ryan’s girlfriend before he married Janna Little is also a Democrat — a black woman named Daneeta Pope who also had twice voted for Obama.

According to Daily Mail, Daneeta Pope had spent 5 months in prison for defrauding her employer Ernst & Young out of $77,000 in 1999, according to the federal Bureau of Prisons. Pope said she used the funds to attend an educational course — which did not exist. Paul Ryan has stayed in touch with Pope over the two decades since they broke up, including attending her wedding in May 2012.

“Speaker Paul Ryan will not operate his family unit and make decisions that will cause friction and go against the will of his wife.

So if you want to understand why Speaker Ryan funded Obamacare and Planned Parent Hood, I suggest you ask his wife. She is wearing the pants in the family metaphorically speaking. In my humble opinion.

If you want to know why Paul Ryan is using taxpayer money to fund 100,000 un-vetted Syrians for a free taxpayer funded ride in cities across the United States ask his wife…. the bleeding heart liberal that she is. She is pro-open borders.

Paul Ryan’s decisions and thought processes are a reflection of his spouse’s mindset. Mrs. Ryan is a life long Democrat who is pushing Obama’s agenda through her husband. And of course a happy life is a happy wife. […]

Paul Ryan is not a conservative my friends… if he was he would never have married Jenna Little. […] Speaker Paul Ryan is a Charlie Crist Republican, who is perhaps being manipulated by a Liberal wife. […] Politics makes for strange bedfellows, in this case it is Janna and Paul Ryan.”