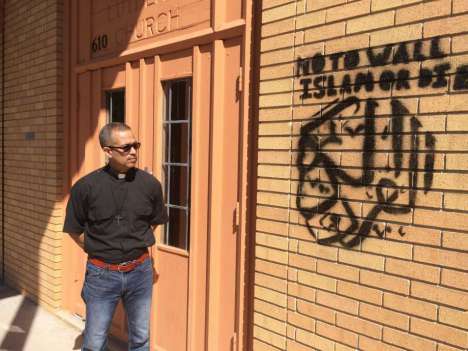 This got little to no media coverage — of course.

Police are investigating the defacement of a San Antonio church after vandals spray-painted “No to wall” and “Islam or die” next to the entrance.

An unidentified symbol was painted under the words at Gethsemane Lutheran Church in the 600 block of Avalon Street, the San Antonio Express-News reports.

Graffiti defaces S.A. church with 'No to wall' and 'Islam or Die' https://t.co/YtggJMHjT8 pic.twitter.com/Dkw219t1n3

Eric Miletti, the pastor at Gethsemane, told the Express-News that he first noticed the graffiti Monday morning.

He said he wasn’t sure whether the vandalism had anything to do with Donald Trump’s signature presidential campaign promise to build a wall along the U.S.-Mexico border.

Miletti said police were notified of the vandalism and a report was filed. He said he would ask the city to remove the paint once police give the OK.

A former CIA analyst tweeted it wasn’t an “unidentified symbol”, rather it was an attempt to write the Islamic war cry “allah akbar” although a Muslim noted it was spelled incorrectly.